Deputy Commissioner of Rewari district orders probe after people object to high pollution from existing Daruhera industrial estate, which is proposed to be expanded into Manesar-Bawal investment zone 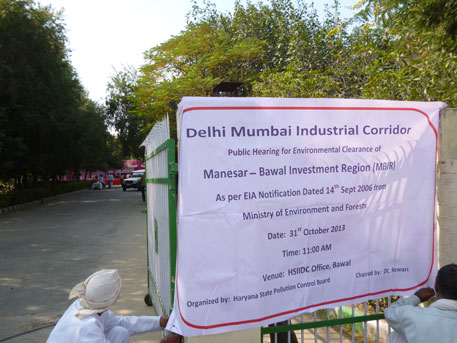 The Delhi-Mumbai Industrial Corridor project, an Indo-Japanese mega infrastructure project, is not going down too well with farmers in villages whose lands are being acquired for developing the “global manufacturing and trading hub”. Earlier this year, villages in Maharashtra had protested forceful land acquisition for the project. Now villages in Haryana who have been opposing land acquisition for the project registered their protest afresh at a public hearing organised on October 31 for the expansion of Dharuhera industrial estate as part of the Delhi-Mumbai industrial corridor project.

People in the affected area on the outskirts of Delhi protested the project, citing existing pollution from Dharuhera industrial estate along NH-8 (Delhi-Jaipur road) with large manufacturing plants of popular companies like Hero Honda Motors, Rico Auto Industries and Sehgal Paper Mills. Following this, the deputy commissioner of Rewari, C G Rajini Kaanthan, ordered an inspection of polluting industries on the insistence of residents.

The existing Dharuhera industrial estate of the Haryana State Industrial and Infrastructure Development Corporation (HSIIDC) and the surrounding area is proposed to be expanded and made a part of the Delhi-Mumbai Industrial Corridor as Manesar-Bawal investment region. For this, a public hearing was called, which is mandated as part of Environmental Clearance procedure for such projects. The Delhi-Mumbai Industrial Corridor project worth US $90 billion is being developed with financial and technical aid from Japan. The project would be developed along a 1,483 km corridor between the political capital and the business capital of India—Delhi and Mumbai. The project is an industrial zone spread across six states—Uttar Pradesh, Delhi, Haryana, Rajasthan, Gujarat and Maharashtra—and would include six mega investment regions of 200 sq km each.

Land acquisition for the project was marked with violent protests last year. When land acquisition started in more than twenty one villages near the Bawal region, people blocked NH-8. The protest turned into riots and four buses were burnt along the road last July.

The public hearing of the project, called to discuss the environmental aspects of the project, was attended by farmers from these affected villages. They patiently listened to the consultants at the hearing, but started protesting vehemently when their presentation concluded.

“Don’t keep telling us stories. You say that’s the institutional zone (pointing to the slide). Tell us how many schools or colleges would come up there. We have heard such stories before. Can you point out one school which has come up in this area?” asked Om Prakash, a resident of Asalwas village. “There is only industrialisation, no development is happening. Our sweet water, land, air, all is lost. Enough industrialisation has happened. We don’t welcome the project.” 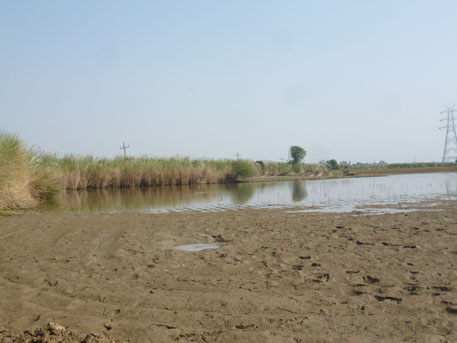 People complained the existing industry is polluting the environment and that there is least development in terms of education and income to the people of the area. They complained of heavy influx of migrants from other areas. The population more than doubled because of Dharuhera industrial area, they said.

People also complained against industries next to their compound walls.  The consultants present started explaining the concept of green belt as a mitigation measure, which outraged the crowd even more. The residents then posed questions about the number of trees around existing industrial units.

Noise pollution near schools, excessive air pollution and water pollution, acquisition of community land were major concerns at the hearing. D V Raghav, assistant general manager with HSIIDC, and Dinesh Kumar, the state pollution control board regional officer for Dharuhera, rebutted them. “We have inspected the plants earlier, the plants are complying with standards,” they said.

The explanation irked the village residents further. “The chimneys give out smoke which is visible to our eyes, the water colour is bad, we could make out that the effluent treatment plant is not working and you keep telling the plants are meeting the standard! How are we to believe? Come with us and we can show you now the state of waste water, and the water logging we have to suffer,” shouted Surender Singh of Dodhai village.

Following the altercation, the deputy commissioner of Rewari placated the crowd by ordering an enquiry to ascertain the pollution caused by Dharuhera industrial estate. The industries will be inspected by a team of community representatives, regional officer of the pollution control board and HSIIDC by the end of this month.

Further action will be based on the inspection report orders. The public hearing concluded with the authorities recording the opinions expressed by people, which will be sent to the Centre for consideration for grant of environment clearance.

Desh Raj Nambarlal, sarpanch of Dodhai village, said if things don't change, sit-in demonstration on NH 8 road is the only choice for people. “About 70 families have been affected by this effluent water flooding. We have lost over 20 hectares of crops this year. We have given our representations to the district collector, pollution control officer, HSIIDC chairperson and many others. Now at the public hearing they have promised some action within a month.  If we don’t get any relief, then the only way out is sitting on dharna on NH-8,” the sarpanch said.

Delhi-Mumbai corridor - A water disaster in the making?