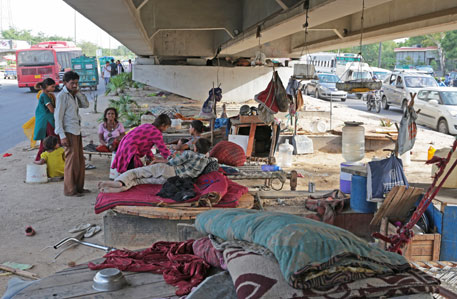 Delhi is a city rushing to gain “world class” status by projecting big buildings, a world-class metro rail, malls and flyovers. But it also has a not-so-glitzy side to it, inhabited by a burgeoning number of extremely poor people who have no shelter.

These pavement dwellers are not only vulnerable to road accidents deaths, but also to the city's pollution. Many of them are dying of lung diseases and pulmonary disorders, shows a recent study published in the International Medico-Legal Journal.

For the study, carried out between 2006 and 2012, researchers at the All India Institute of Medical Sciences (AIIMS) examined over 1,300 unclaimed bodies and carried out their autopsies. The examination showed that over 800 men died of natural causes, compared to 61 women. A record of 500 pneumonia cases, nearly 200 chronic lung disease cases and some cases of cardiovascular diseases was made. About 402 men died of unnatural causes compared to 53 women.

Sudhir Gupta, head of forensic medicine department at AIIMS, and Chittaranjan Behera, assistant professor in forensic medicine, co-authors of the study, carried out the autopsies on unidentified bodies brought to the hospital and have highlighted the alarming problem. The study covered only south and south-east zones in Delhi and not the whole city. So the actual number of deaths of homeless people because of lung diseases and pulmonary disorders in the city in the period would have been much higher.

Website of Zonal Integrated Police Network gives some clue about the high number of such roadside deaths in Delhi during winters. According to the website, from January 1 to February15, 2014, about 341 unidentified bodies were found in Delhi. Most of them were homeless.

Behera says such roadside deaths are rare in the West.  In India, it is very common, especially in Delhi.

Meet Shekhar, aged 50, a beggar at the Connaught Place inner circle in Central Delhi. He is from Maharashtra, lives alone and chooses to be there as he gets food from the kiosks around. He is a habitual smoker and a large part of his income goes into buying his cigarette supply.

He complains about pain in his abdomen and choking sensation in his throat. But he doesn’t care about it. Delhi roads are full of such beggars, oblivious unaware and carefree.

Another story unfolds under the Nehru place flyover in south Delhi where Tejpal singh, 60, from Aligarh, stays with his family of three. A regular drinker and a heavy smoker, he complains having severe chest congestion at times. His wife Manju is clueless about where to seek help. She herself suffers from lung infection.

Around 20 such families reside under the flyover breathing fumes emitted by heavy traffic the whole day.

Behera says that inadequate health infrastructure, lack of awareness and poor intake of nutrition are the major factors responsible for the poor health of beggars. In Delhi, the weather extremes, the overflowing population and availability of very few night shelters accelerate their deaths.

Winters are worse for pavement dwellers. As many as 494 deaths were recorded in winters as compared to 381 in the summers during 2006-12. Morbidity from pneumonia and lung diseases increases in winters and the shortage of night shelters increases exposure to these infections, leading to mortality, he says.