Delhi's poor vulnerable to health risks due to air pollution 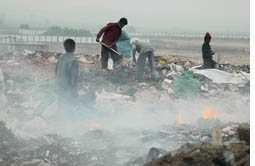 there are inequalities even in the ways one is exposed to pollution. Researchers from New Delhi, in a study, say the poor are vulnerable to acute health risks from air pollution.

People with an annual income of Rs 0.12-1 lakh get exposed to higher pollution than those of rich households with an annual income above Rs 3 lakh, they say. The effect is stronger if the poor reside in industrial areas; older people and children are the worst affected irrespective of where they live.

The researchers surveyed 350 households around seven pollution monitoring stations distributed across Delhi. The surveyed people were classified based on their income. "The richest category bears the least exposure," says Vinish Kathuria of the Madras School of Economics, lead author of the study published in the Economic and Social Weekly (Vol 42, No 30).

The researchers also studied pollution from suspended particulate matters (spm) in Delhi where spm heavily contributes to air pollution. Between 1999 and 2003, Delhi's major traffic point ito recorded spm rates of 430 g/m 3 to 496 g/m 3. The standard limit for any place is 80 g/m 3. Designated as a residential area, ito has the highest exposure to air pollution; slum households being the worst affected. "The high traffic volume and three power plants make the problem worse here," say Kathuria.

There are those who point at gaps in the methodology. "Studying just spm is meaningless. The researchers should have used particles smaller than 2.5 micrometres to comment on the effect of air pollution on health," says T K Joshi of the Centre for Occupational and Eviornmental Health, New Delhi.

Recent estimates by the World Health Organization note that about 1.4 billion urban residents in the world breathe polluted air, which exceeds its air quality guidelines.