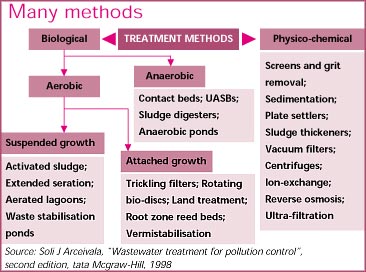 Can anaerobic sewage treatment systems tackle pollution in river Yamuna? Yes, believes the Parliamentary Standing Committee on science and technology, headed by Rajya Sabha member P G Narayanan. Observes its report tabled on August 18, 2004: "With this simple and cheap technology, it will be possible to treat... sewage and bring the pollution load bod and cod [Biological Oxygen Demand and Chemical Oxygen Demand, both parameters to measure pollution in waterbodies] within permissible limits." A telling observation, considering Delhi's wastewater scenario: out of the 3800 million litres per day (mld) wastewater the city generates, only about 1500 mld is treated in its sewage treatment plants (total capacity 2300 mld). Delhi needs extra treatment capacity of 1500 mld. If anaerobic systems -- which do not use oxygen to decompose organic matter in sewage, unlike aerobic ones -- are now installed, will the sewage be treated to desirable levels of cleanliness?

There exist a wide spectrum of technologies for wastewater treatment (see figure: Many methods). Municipal corporations commonly use biological processes. The nub of the debate, therefore, is: aerobic, or anaerobic? Experts feel the choice of technology should depend on site-specific techno-economic parameters. Says Shyam Asolekar, professor, iit Mumbai, "Considerations should include parameters like land availability, the end-use of treated effluent and a community's willingness to pay for treatment." Substantiates R H Siddiqui, a pollution control expert, "Selection of technology depends on the desired level of treatment. Looking at the Yamuna, the effluent standards should be as low as possible."
According to Siddiqi, if sewage has to be treated to a bod level of 20 milligrams per litre (mg/l), or a total suspended solids (tss) level of 30 mg/l -- standards prescribed by the Delhi Pollution Control Committee (dpcc) for Delhi -- aerobic systems should be preferred. Adds Asolekar: "Anaerobic systems work well in highly concentrated sewage." But given the high rate of per capita water supply -- 211 lpcd, or litres per capita daily, as compared to the national standard of 140 lpcd -- in Delhi, the sewage is likely to be diluted.
Says Asolekar, "Foot prints (area requirements) are smaller for anaerobic systems, in itself a great advantage." Siddiqui adds: "Power consumption is much lower as compared to aerobic systems. Operation costs are therefore lower."
Experts also points out that anaerobic systems require skilled staff as compared to aerobic systems. Tency Baetens, of Pondicherry-based Auroville Centre for Scientific Research, brings in another angle. "Anaerobic systems work well in hot climates, which essentially means winter months in Delhi might be problematic." He believes that in most decentralised wastewater systems, a combination of the technologies should be used. Asolekar agrees. He asks: "Why not initially treat the sewage anaerobically, reducing pollution load to 60 to 70 per cent? And then, refine it using aerobic systems?" This would be the best strategy, Asolekar thinks, for the wastewater that reaches a treatment plant in Delhi is a mixture of domestic and industrial wastes.

Whatever the choice, why can't treatment plants in Delhi be optimally used and managed, as they aren't currently?