Will a study induce government to check contamination of waterbodies by arsenic from coalmines? 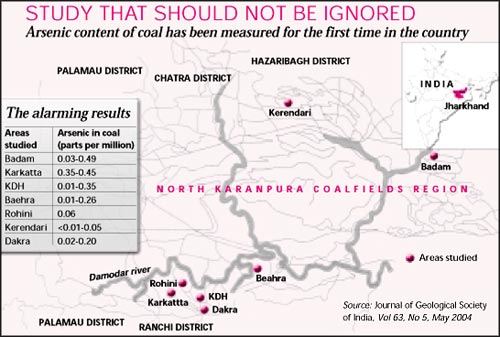 a new study is yet another evidence of the Damodar valley facing a health and environmental apocalypse thanks to the lackadaisical attitude of the officials.

The research, conducted by Nitish Priyadarshi of Jharkhand-based Ranchi University, proves that coal mined in the region contains substantial levels of arsenic, which is leaching and contaminating the local waterbodies and the Damodar River -- the area's lifeline. Arsenic is a poisonous substance, exposure to which can lead to arsenicosis, a disease linked with cancer.

It is not for the first time that an alarm has been raised about the adverse phenomenon. "It is widely known that Indian coal contains arsenic, which easily leaches into water," affirms Dipankar Chakraborty, director of the School of Environmental Studies, Jadavpur University, West Bengal. Since 1993, Priyadarshi has published numerous reports about the occurrence. During his latest study, he took a step further by measuring the arsenic content of coal. It is for the first time that arsenic concentration of coal has been measured in the country. "It is an initial step towards scientifically establishing the correlation between coal's arsenic concentration and the levels in water," asserts Priyadarshi.

He scrutinised coal from the North Karanpura coalfields, which lie in the Palamau, Ranchi and Hazaribagh districts of Jharkhand. These coalfields produced 5,142 thousand tonnes of coal during 2003-2004. The coal lying in the dumps amounted to 8,567 thousand cubic metres. As per Priyadarshi, it is this 'dumped' coal that is the key source of contamination. The dumps -- heaps of unprocessed coal and soil -- leach arsenic by way of the oxidation process: when the coal comes in contact with water, it starts weathering. Thereafter, its arsenic gets exposed to atmospheric oxygen, becomes unstable and then starts leaching.
Priyadarshi analysed coal samples from five sites using highly precise and sophisticated equipment. He found that the samples had arsenic concentration of 0.15 parts per million on an average.

He further assessed the local waterbodies and river Damodar. He found that the water from the river and its tributaries had arsenic content in the range of 0.2-2.0 milligrammes per litre (mg/l) -- much above the World Health Organization's guideline of 0.01 mg/l. The same concentration of the poisonous substance was found in the waterbodies located near the mining area. But water samples from a pond located five kilometres away from the mining area had arsenic below detectable levels.

As per Priyadarshi, these results amply prove that arsenic is not present naturally in the rocks and sediments of the area, and is being leached by anthropogenic sources (Journal of Geological Society of India, Vol 63, No 5, May 2004). The only way to combat the problem is to shift the dumps to barren land, far away from any waterbody. "The findings show that this would be an ideal way to prevent contamination and save thousands from suffering from arsenicosis," he declares.

But this seems to be a far-fetched idea, with the officials overlooking the crisis for years despite the mounting evidence. When questioned by Down To Earth, R V Singh, general manager of the North Karanpura coalfields, stated that he was unaware of the problem. Ironically, his subordinates know about the mayhem. "In the wake of Priyadarshi's reports, we got water samples tested at the Central Mines Planning and Design Institute (cmpdi) Limited, Ranchi. But the study did not find high concentration of arsenic," proclaims Arun Shukla, an environmental engineer at Central Coalfields Limited (ccl) -- the company managing the North Karanpura coalfields. In 2002, ccl had also analysed the water of the coalfields, but the report was never made public.

As per experts, if officials continue to falter, then the area may become an arsenic hotspot. "The problem requires simple remedies. Other countries have done so, then why can't India follow suit?" asks Priyadarshi. His contention can be easily corroborated -- since the 1940s, the Oak Ridge coal 'reservation' of the us department of energy (doe) had been releasing metals, including arsenic, into the Clinch River and Watts Bar water reservoir of Oak Ridge. In 1989, arsenic contamination was studied and the findings prompted doe to initiate a clean up programme armed with us $157 million. Can India afford such high mitigation cost?