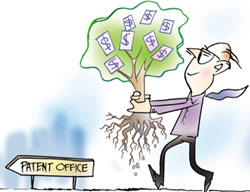 Foreigners file 75 per cent of patent applications in India. Indian scientists and research organisations are also increasingly filing for patents, though mostly in the us. On the one hand, the preponderance of foreign patent applications in India, commentators say, could lead to increased dominance of foreign companies in Indian markets in future. On the other, the practice of filing applications in the us leads to wastage of resources because the process is more expensive and most of the patents obtained have very little revenue-generating potential.

"Some of this research (for patent applications in India) takes place in the parent country and some of them are outsourced to India," says R K Gupta, the head of the patents division of the Council for Scientific and Industrial Research (csir). "While we are trying to push for more patents, the large number of patent applications filed by foreigners indicate that companies are eyeing India as a market where they need to protect their research." This is evident from the statistics of the World Intellectual Property Organization, through which many foreign companies file patent applications in India via the Patent Cooperation Treaty, says Manthan D Janodia, lecturer in pharmacy at the Manipal Academy of Higher Education.

Ravi Verma of the Delhi-based patent consultancy firm Jia Associates, concurs. He says most of the patents are from the pharmaceutical and automobile industry. "People in India are still not aware of the importance of patents. Thus the investment on patent-related research by Indian companies is also much less than that of foreign companies," he adds. Indian patent filings during 2004 and 2005 were estimated to be more than 17,000. "Between 1985-1986 and 1994-1995, patent applications, which averaged around 3,800 annually, have risen considerably. However, it needs to increase at a faster rate," says Gupta.

Unfortunately, this push for the patent culture has led to scientists squandering money on frivolous patents filed in the us, critics say. In a letter published in Current Science (September 25, 2006, Vol 91, No 6), N Udupa of the Manipal academy and his colleagues said it was easier to obtain a patent in the us than in any other part of world. He argued that taking advantage of this, scientific organisations in India were increasing their patent portfolio by "wasting money on us patents that are of no benefit to the society".

Criticising a us patent (No 6410059) for a substance extracted from cow urine which the patent-holder claimed enhanced antibiotic activity, senior scientist U C Lavania of the Central Institute of Medicinal and Aromatic Plants (cimap), Lucknow--a csir laboratory which acquired the patent--wrote in Nature (August 17, 2006, Vol 442, No 744) that the patent was granted despite not passing scientific scrutiny. cimap has also got a us patent for a variety of poppy. Ironically, poppy cultivation is heavily restricted in the us , making the prospect of revenue generation from the patent minuscule. "This kind of activity, which is widespread, diverts millions of dollars from research into filing patents which will generate no revenue," Lavania complains.

In the past five years, the expenditure on patents has been Rs 89.7 crore while the earnings have been Rs 18.5 crore. csir , which promoted patenting the most, has been acquiring, on an average, about 400 patents annually of which only 170 have been commercialised. The average cost incurred by csir in obtaining a us patent is around Rs 5 to Rs 6 lakh and in Europe, about Rs 7 to Rs 8 lakh. Scientists ask whether such huge expenditure should be allowed without proper plans of commercialisation of the patents in place.

csir director general R A Mashelkar whose slogan "patent or perish" set off the rush for us patents, says it is too early for csir to expect big returns considering that only about 3 per cent to 5 per cent of patents worldwide are commercialised, but says the new culture is a positive development. "Patenting culture is new in India. Indian universities and iits are poor in patenting. Scientists, who are used to the culture of producing only research papers, consider patenting an added responsibility which delays publication. The culture is changing though. This is evident from the rising number of patent applications from India," he adds.