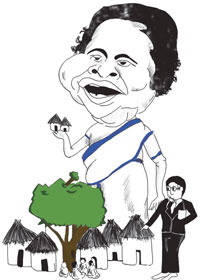 THE West Bengal government is set to establish a three-tier bureaucratic system to monitor the three-tier panchayati raj system. Chief Minister Mamata Banerjee made the announcement on November 3 after a meeting with district administrative officials.

A week later, the government issued an order, which proposes to set up development monitoring committees at block, sub-divisional and district levels. The committees will comprise bureaucrats like block medical officers and executive engineers, and will be chaired by the block development officer, sub-divisional officer and district magistrate. The monitoring system would ensure coordination among departments, implementation of projects “where field level problems arise”, and also “supervise” and “inspect” projects to bring any deficiencies “into the notice of the government”, says the order.

Talking to reporters Banerjee said, “during the tenure of the previous government the entire system collapsed and development work stopped, mainly due to lack of coordination among departments. In many areas the panchayats are not functioning properly and there is no transparency.”

But coalition partners of Banerjee’s All India Trinamool Congress decry the proposal. “We are opposed to a monitoring committee for panchayat matters with only bureaucrats and no elected panchayat representatives,” says Debaprasad Roy, executive member of West Bengal Pradesh Congress Committee (WBPCC).

As per the panchayati raj system all tied funds to panchayats for government schemes like the one under MGNREGA (Mahatma Gandhi National Rural Employment Guarantee Act) require the approval of the district magistrate. Four years ago, then ruling Left Front government made government executives’ approval mandatory for untied funds as well. The powers of panchayats have already been curtailed to a significant extent, he says.

At a recent WBPCC convention on panchayati raj institutions, Union finance minister and Congress leader Pranab Mukherjee criticised the proposal, saying, “If the work of panchayats is done by bureaucrats, it will not lead to strengthening of democracy.”

The announcement comes as a surprise for a state reckoned as the harbinger of grassroots democracy. West Bengal was the first to experiment with devolving power to the gram panchayat, the lowest tier of democracy, way back in 1978. It was a model for the Constitutional Amendment of 1992, which gave birth to the panchayati raj system.

Analysts say the decision to bring the panchayati raj system under bureaucracy might have been triggered by electoral realities. The Trinamool Congress-led coalition came to power in June this year with a decisive majority by defeating the longest-serving Left Front rule in the state. But the CPI(M)-led Left Front still controls 13 of the 17 zilla parishads. “The order is to facilitate Trinamool Congress influence and win the 2013 panchayat elections,” says a Congress MLA of West Bengal who does not wish to be named.

Notably, when super cyclone Aila tore through West Bengal in 2009, Trinamool Congress, then in the opposition, demanded the opposite. Banerjee wanted the Central aid to be directly granted to gram panchayats. The party controls gram panchayats in East Midnapore, South and North 24 Parganas, the hardest hit by Aila.

According to George Mathew, chairperson of the Institute of Social Sciences (ISS) in Delhi, “The order sabotages the very spirit of local governance.” The panchayat pradhan or sarpanch is like the chief minister and the gram panchayat or village council is his cabinet. “Now, can you imagine the chief secretary and his retinue of bureaucrats reviewing and monitoring the performance of the chief minister or the cabinet?” he asks. ISS, also a think tank on local governance, is planning to file a public interest petition against the government order.

“The way forward is to give more power to the ignored fourth tier of PRI—the gram sabha or village assembly—rather than transferring power from panchayats to bureaucrats,” says Anuradha Talwar, a grassroots activist and adviser to the commissioners of the Supreme Court on right to food. In West Bengal, the gram sabha meets irregularly. Devolving power to it will ensure more accountability and better monitoring. The present proposition is a move in the opposite direction, she adds.