The millions affected have many to curse -- the mosquitoes, officials and the scientific communityby Ritu Gupta 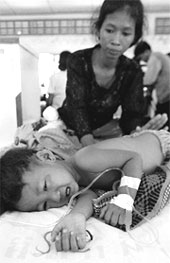 recognising the worsening global epidemiological trends for dengue, the recently held 55th World Health Assembly of the World Health Organisation (who) passed a resolution urging the international community to spend more funds and expend efforts on dengue research. who reports that every year, 50-100 million people fall prey to the disease endemic to the tropics. The figure is a gross underestimate, for dengue symptoms are often misdiagnosed. Last month, the government of El Salvador had declared a state of emergency and general calamity due to the increased number of dengue fever cases.

The disease is caused by one of four closely related virus serotypes of the genus flavivirus. The viruses are maintained in a cycle involving humans and Aedes aegypti, a domestic, day-biting mosquito that mostly breeds in clean water. Infection with the viruses produces a spectrum of illnesses, including fatal hemorrhagic fever.

Over the past five decades, the disease incidence has shown a 30-fold increase. Demographic changes, particularly urbanisation, are largely to be blamed. Mosquito control efforts have slackened due to lack of funds. Moreover, dengue neither has vaccine nor any treatment beyond painkillers or intravenous fluids and plasma transfusions for the most severely stricken. The dengue virology makes matters worse: catching dengue once is no defence against catching it again. On the contrary, infection by one strain lays the ground for the next.

The most important factor for lack of control is the fact that dengue is almost absent in developed world, and is therefore, a less lucrative research area than most. At the last count, in 1998, the us Centre for Disease Control and Prevention (cdc) estimated that worldwide spending on malaria research totalled us $84 million. Dengue, by contrast, drew a paltry us $5 million.

But, lack of research is not the end of the road. Scientists say that eradication of the disease is simple: destroy the mosquito and its eggs, and the virus cannot prosper. One method for this is fogging, but as Hermann Schatzmayr, head of virology at Oswaldo Cruz Foundation, Brazil, says, "No one bothers with control until people die."
Things are no better in India. "During an epidemic in 1996 in Delhi, at least 410 persons had died. The case fatality rate was 4.5 per cent -- much higher than countries like Thailand, which has a mere 0.5 per cent," says N L Kalra, a consultant entomologist with the New Delhi-based Malaria Research Centre. After the 1996 outbreak, a public interest litigation was filed against the Union government and the Delhi government in the Delhi high court. Soon after, in its judgment, the court had held the government agencies responsible for the loss of lives. The government "was in a total state of unpreparedness" despite repeated warnings by who, the court stated, adding that a national anti-dengue programme should be evolved.

However, till date no such programme has come into existence, despite one proposed to the Planning Commission by the New Delhi-based National Anti-Malaria Programme (namp). Kalra explains this thus: "Health is a state subject, and therefore, ignored by the Union government. State governments, on their part, place the responsibility on local self-governments. But the municipal corporations neither have the money nor the expertise to combat the disease. Therefore, people are left to die. Whenever there is an outbreak, surveillance and research is taken for the sake of public opinion." According to R L Ichhpujani, head of the zoonosis division of the New Delhi-based National Institute of Communicable Diseases (nicd), the state governments ignore the results of research conducted after every epidemic. "Such results can be of great help in future surveillance," he says.

Surveillance is nowhere in the priority list of the administrators. "People die of many diseases other than dengue. Citizens should be responsible for their health, not the government," says K N Tiwari, director, health services, Municipal Corporation of Delhi. But such 'theories' are not viable in places like Tadasa-Nalli village of Karnataka, which recently witnessed a severe dengue outbreak. The outbreak was attributed to unhygienic water tanks. Though the control measure -- throwing away the tanks' water -- was very apparent, villagers refused to do so. Reason: acute shortage of water. The Tungabhadra river that usually catered to their needs had gone dry and the groundwater level was alarmingly low. The villagers blamed the administration for not being alert when required.

This is not the end of official apathy. Administrators ignore the fact that citizens cannot control mosquito breeding in public places. A 2001 survey of namp in 10 hospitals and 10 schools of Delhi found that these places were massive breeding grounds for the virus. Officials like P K Phukan, additional director of namp, opine that the only way out is imposing penalty on citizens. However, R S Sharma, joint director, namp, differs. "The problem with dengue control efforts is lack of inter-personal communication between citizens and government agencies," he says. "Community participation is a must in combating dengue. Citizens need to be educated and trained to this end. To evolve community participation guidelines, applied research is essential, but this is not in evidence at all," asserts V P Sharma, a consultant with who.

At present research is focussed on studying the disease pathogen. "Research should focus on efforts aimed at preventing dengue outbreaks," says Pradeep Seth , head of the department of microbiology, All India Institute of Medical Sciences, New Delhi.

Considering the present state of affairs, research on vaccine development is a distant dream for India. However, efficacy trials for a vaccine developed by researchers from Thailand would be soon underway, reveals Lalit Kant, senior deputy director-general of New Delhi-based Indian Council of Medical Research.


Thailand is part of pioneering investigations into developing dengue vaccines. Since there are four distinct dengue viruses, the challenge is to concoct a four-way vaccine, effective against all the strains.

Work began on dengue vaccines in the 1970s, but it is only now that they are edging towards clinical use. The one developed at Mahidol University in Thailand, and another developed at the Walter Reed Army Institute of Research in usa, are the most promising. They are based on living, weakened dengue viruses, selected by growing all four serotypes through multiple generations in cultured cells. The Bangkok vaccine is now licensed to Aventis Pasteur of Lyon, France. Ongoing safety and efficacy trials show that the vaccine is safe and protects up to 90 per cent of recipients from all four serotypes. The Walter Reed vaccine, licensed to Belgium-based GlaxoSmithKline Biologicals, will be tested later this year.

Other candidates are also on the way. One of these is based on a modified form of the yellow fever vaccine. Developed by Acambis of Cambridge, the uk, the vaccine has been prepared from a live, weakened yellow fever virus carrying genes for the dengue protein coat. Unlike the Thailand and Walter Reed vaccines, which would require two rounds of vaccination, the Acambis vaccine would require just one. The us Naval Medical Research Centre in Silver Spring, and California-based biotech firm Maxygen are also developing a vaccine consisting of genes for dengue coat proteins, packaged with other dna that promotes the recognition of these proteins by the immune system.

But given the fact that dengue is primarily a third-world affliction, none of these vaccines are likely to be major money-spinners. Therefore, public funds would be vital for them to have a far-reaching impact. For the time being, the who offers a humdrum prescription: put the brakes on runaway urbanisation, pick up the garbage, pipe in water instead of storing it in tanks and, especially, teach people the simple secrets and obligations of sanitation. "It's not during the epidemics but in the intervals that we need to get people's attention," says Michael Nathan, head of parasitic diseases for the who.