Three of the 12 games venues in Brazil—Natal, Fortaleza, and Recife—carry high-alert warning 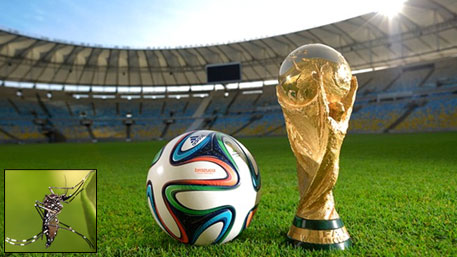 Brazil might face a dengue outbreak around the same time as football World Cup 2014, which the country is hosting between June 12 and July 13. A new early warning system has predicted the risk at local levels, giving authorities ample time to take precautionary measures. Brazil has recorded more cases of dengue fever than anywhere else in the world, with more than 7 million cases being reported between 2000 and 2013.

Dengue is a mosquito-transmitted disease, the spread of which is dependent on local climatic conditions, including temperature and rainfall. Scientists used data regarding climate forecasts and patterns of dengue fever in the country to make predictions. Results of the study were published on May 17 in the journal, The Lancet Infectious Diseases.

Forecasts for June 2014 showed that three of the 12 venues for the games—Natal, Fortaleza and Recife—have been given high-alert warning. The risk was medium in Rio de Janeiro, Belo Horizonte, Salvador, and Manaus. The risk is low in the cities of Brasília, Cuiabá, Curitiba, Porto Alegre, and São Paulo.


"Recent concerns about dengue fever in Brazil during the World Cup have made dramatic headlines, but these estimates have been based solely on averages of past dengue cases. The possibility of a large dengue fever outbreak during the World Cup, capable of infecting visitors and taking dengue back to their country of origin, depends on a combination of many factors, including large numbers of mosquitoes, a susceptible population, and a high rate of mosquito-human contact," explains lead author, Rachel Lowe, from the Catalan Institute of Climate Sciences in Barcelona, Spain.

In particular, climate has an important effect on dengue transmission in epidemic-prone areas. Temperature and rainfall drive both mosquito and virus transmission dynamics. The risk of an epidemic increases shortly after a season of heavy rainfall.

"Our aim was to take the available evidence on real-time seasonal rainfall and temperature forecasts, transmission dynamics, and social and environmental variables (urbanisation, for example), and combine it with the latest in mapping and mathematical modelling to produce robust risk estimates for the 12 host cities where matches will be played," says Lowe.

The authors of the paper studied 553 micro-regions of Brazil and obtained real-time seasonal climate forecasts from several international sources (European Centre for Medium-Range Weather Forecasts or ECMWF, Met Office, Meteo-France and Centro de Previsão de Tempo e Estudos Climáticos or CPTEC). In addition, they observed dengue epidemiological situation in Brazil at the forecast issue date as provided by the ministry of health. The authors used the Bayesian modelling framework that enabled dengue warnings to be made three months ahead.