Government gives in to pressure from the food industry, consumers 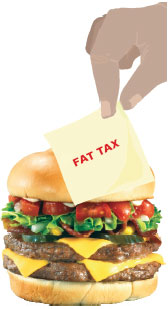 IN A blow to the anti-obesity drive across the globe, Denmark’s tax ministry has scrapped tax on food high in fat content within a year of implementing it. The ministry also decided against the sugar tax it had proposed to introduce this year. The tax on fat, imposed in October 2011 to improve health, was strongly opposed by industry as well as consumers because of rise in prices of food products, including milk and cheese which are naturally high in fat content.

Public health experts say it is a regressive step. “The country’s health system will have to pay a huge price of combatting totally preventable non-communicable diseases like cardiovascular diseases caused by excessive consumption of fat and sugar,” says Monika Kosinska, secretary general of European Public Health Alliance, a non-profit working for the cause of public health in Europe.

“Instead of surrendering to the food industry, the Danish government should have modified the taxes in such a way that natural and healthy foods like cheese, milk and meat did not come in its purview,” says Rahul Verma, founder director of Delhi-based non-profit Uday Foundation, which has been running a campaign to get junk food banned in India’s schools.

FoodDrink Europe, the body representing the European food industry, which is second only to the metal industry in the manufacturing sector, says the tax was responsible for price rise and job cut and brought no change in consumer behaviour. “Food taxes are not the most effective approach to tackling complex diet and lifestyle-related problems like obesity,” it had stated in a press statement released in November 2011. 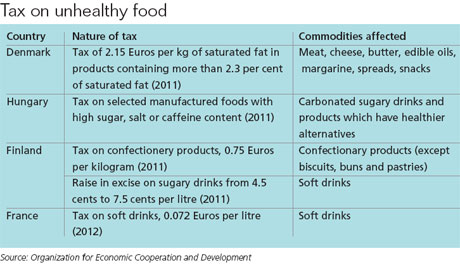 However, Mette Wier, executive director of Danish Institute of Governmental Research, who was chair of the health committee that had proposed sugar tax, says there is evidence that the tax works. Taking lead from Denmark, Hungary, Finland and France imposed similar taxes on food products considered unhealthy (see table). In studies published in British Medical Journal in May 2012, experts proposed fat tax of more than 20 per cent to curb consumption of unhealthy food.

Obesity Update 2012 published by the Organization for Economic Cooperation and Development, an international forum working on people-oriented policies, points out that a well-designed tax on unhealthy food is likely to be successful if it provides proper substitutes. “The experiment did not last long enough to know its impact,” says Jorn Olsen, professor at the Institute of Public Health of Aarhus University in Denmark.

Wier thinks that fat tax was scrapped to buffer the damage caused by the economic crisis. Danish companies were under pressure and politicians were worried that all taxes, including fat tax, would cause damage, she says.

Consumers were upset because tax was imposed on natural ingredients. Many had started to cross the border to Germany to purchase food products resulting in loss of consumer trade in the country. In a press statement, Denmark’s ministry of tax accepted that fat tax had indeed increased cross border trade. “The Danish government should have made efforts to convince people,” says Verma. In fact, the industry was also considering reducing the levels of fat, salt and sugar contents in food products. But the government ignored all such possibilities.

“The example the Danish government had set has been reversed. It will definitely discourage people all over the world from demanding such steps to ensure public health,” he says.