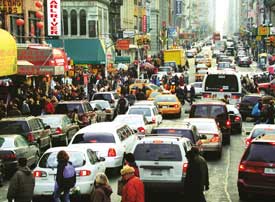 residing in an area with heavy traffic may not only affect health but also social behaviour. According to a new study, Traffic's Human Toll, heavy traffic on streets in the vicinity severely limits the ability to know neighbours or enjoy outdoors. Transportation Alternatives, a us -based ngo advocating environmentally sensible transportation issues, carried out the study in New York.

The study revealed that New Yorkers living on streets with high volumes of traffic spend less time outside and are likely to restrict their children's outdoor play compared to people who live on medium and low traffic streets.Previous studies have established that increasing traffic flows also heighten personal fears for safety that reduce participation in cycling and walking with a subsequent loss of health benefits from these activities. The new study also found that compared to residents on low traffic streets, residents on high traffic streets are twice as likely to be disturbed by traffic while they are walking, talking, eating, playing with kids and sleeping.

Further, the study finds that New Yorkers on high traffic streets harbour more negative perceptions of their block, and, in two of the four areas under study, possess significantly fewer relationships with their neighbours compared to residents on low and medium traffic streets.

The study found that 49 per cent of the residents interviewed said reducing traffic would "totally improve" their quality of life. Of those respondents residing on heavy traffic streets the figure was 62 per cent.

"The study reasons for developing a comprehensive strategy to replace driving trips with less harmful transit, walking and bicycling trips," said Paul Steely White, executive director of Transportation Alternatives. Earlier, in March, the us Environmental Protection Agency had reported that New York's air quality is among the worst in the nation and vehicular sources like cars, trucks and buses generate 80 per cent of the pollutants. Experts believe that increased traffic volume leads to a more hostile urban living environment particularly for children.