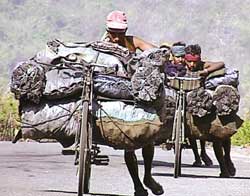 "You'll see them everyday, just wait at the railway station before a train to Delhi departs," a tribal activist in Ranchi had told me. I went to check if what she'd told me was true. It was. There they were: scores of young women -- girls, really -- huddled on the platform, waiting for the 'agent' to take them to Delhi and employment. I'd also seen tribal villages in Jharkhand where few young women were left. Going to Delhi as servants is a compulsion for them.

I've seen the other end of this unorganised labour market in Delhi. There are friends and family who employ tribal girls from Jharkhand. They mostly live in the store, or under the stairs, often have difficulty communicating. Some girls are lucky and land up in caring households -- they get enough to eat and tv to watch. As for the others, it is difficult to describe the exploitation they live every day. I've tried to speak to friends and relations, explain them how inhuman this racket is. Their response is simple: at least we provide these girls food and shelter. I've learnt: it is difficult to talk sense to educated people. So, how does one communicate ? This film has some answers.

The greatest problem in discussing the tragedy of tribal India is that people are either uninterested and look upon you as a bleeding-heart liberal, or they get bored listening to sad stories. Because most such stories are told with lots of passion and little skill. Given this problem, Ab aur Waqt Nahin is a refreshing venture in communication.

The film begins with happiness -- the paddy crop has just been harvested. No rants here. Just a lively introduction to tribal life, its hues, its economy and ecology. With tastefully shot sequences, it breaches the idea of the tribal as the noble savage, replacing it with the cultivator who has learned to live with the forest, the source of food and water. The connection the adivasi has with land -- economic and cultural -- comes through as reality, not as a notion depicted through romantic, tearful eyes.

It brings the viewer up to date on land relations, and how they changed through history. That tribal agriculture is in dire straits today is due primarily to lack of water, which has to do with change in land use. The water catchment -- land and its forest -- is threatened by mining. These messages come across in the film, both in terms of recollections of tribal people and statistics, narrated in a subtly ironic, understated style. The power to move the viewer is left to images.

Two sequences deserve special mention. One, Ranchi's Lalput Chowk, where contractors come to hire tribal labour. Just one line says all there is to say about the betrayal of adivasis in a state created after a mass movement led by them: "At Lalpur Chowk, you know who controls Jharkhand." It reminds us that political parties that opposed the Jharkhand movement are ruling the state after its creation. The second sequence is adivasi s pushing cycles overloaded with 'illegally' extracted coal across ghat s of Chhotanagpur Plateau, their legs trembling in the fight against gravity and carelessly driven vehicles. Just this sequence is worth the film's 109 minutes.

Shot over five years, the film is obviously a labour of love. The cinematography is such that several images will get lodged in your memory. The music by Ram Dayal Munda, former vice-chancellor of Ranchi University, blends with the smart production values. And no, good taste is not about being coy. The film doesn't soften the brutality adivasis undergo in the brave new India. It just isn't prescriptive.

The film is a graphic protrayal of how adivasi s lose everything when their agriculture is replaced by mines and industrial production. Because without agriculture, they are forced to sell themselves cheap in the labour market.

It is likely the film will communicate to people who are not already sold over to the tribal cause -- most such ventures end up converting the converted. The tone and pitch of the film is such that the unconverted are likely gain a perspective. Especially on the numerous products and services generated by denying adivasi s the most basic rights.