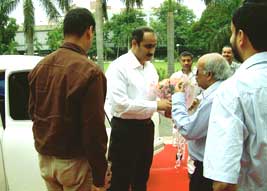 Credit Rating Information Services of India Limited, a policy advisory company and icra Limited, an investment information and credit rating service, jointly prepared the State Power Sector Performance Ratings report. The Union ministry wished to have a performance rating of the power sector across 26 states since it had come up with financial incentives for the power sector under the Accelerated Power Development and Reforms Programme.

The programme aims at improving quality and reliability of supply, and improving commercial viability and consumer satisfaction.

The report evaluated the performance of state electricity boards (sebs) on the basis of their progress in reforms, free power and subsidy, establishment of regulatory commissions, reduction in transmission and distribution losses and revenue collections.

As against a high subsidy of nearly 25 per cent of the total revenue given by the four states mentioned, other states like Andhra Pradesh, Gujarat and Karnataka have cut subsidy support -- a key area of power reforms -- to power utilities, the report notes.

The report warns that giving free power may result in continuing dependence on subsidies by the power sector. It expressed concern over the high aggregate, technical and commercial losses observing that only two states -- Goa and Tamil Nadu -- have losses below 20 per cent. The states also showed a wide gap between the average revenue generated and cost of supply without subsidy.