Low cholesterol helps prevent heart diseases but watch out, excessive loss might drive you towards suicide 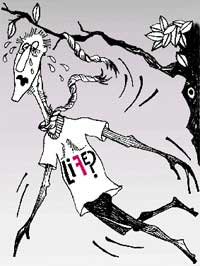 ANY new measure towards reducing cholesterol is welcome, particularly by people with high concentrations of serum and a history of heart ailments. But now, scientific evidence is fast surfacing that such measures may dictate the way you handle your emotions. Two recent studies suggest that low-fat diet may be driving people to suicide. In the patients studied for cholesterol reduction, the overall mortality did not decline because those whose cholesterol had been lowered tended to die a violent death due to accidents, suicide or homicide.

Peter Vitaliano, professor of psychiatry and behavioural sciences at the University of Washington, Seattle, says, "People who behave in a hostile manner tend to have lower levels of both cholesterol and low density lipoprotein (ldl)."

How exactly does low cholesterol affect our behaviour? This hypothesis is based on evidence pieced together from several earlier studies. ldl forms fatty plaques on arteries and also activates some sort of immune response, triggering the production of interleukin-2 by t-cells. Other studies have shown that patients of cancer who are given interleukin-2 treatment experience a reduction of cholesterol, especially of high density lipoprotein. The immune response also leads to a drop in the levels of the hormone melatonin. The fall of melatonin leads to depression.

S Lori Brown, a senior scientist from the Center for Devices and Radiological Health, Maryland, us says in his paper (bmj, Vol 313, 1996) that the basic premise of these studies is that death from external causes has a behavioural component. The central issue is the desirability of lowering the cholesterol level and how close we are in knowing the real risk of such efforts. Brown argues that the grouping of external causes, which include accidents, suicides and homicides is artificial. A biological link may be established between those who died by suicide, known to be associated with depression. But what about the victims of accidents and homicide? In addition, while there may be some behavioural component, influenced by serum cholesterol in those who died in accidents, what about murder victims? Could they have prevented their misfortune had their cholesterol level been higher? But Brown still considers these studies useful, as we are closer to knowing whether cholesterol lowering or low serum cholesterol poses risk from external cause.