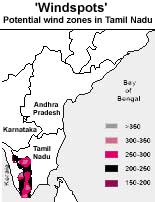 tamil nadu was once a dream state for those wishing to run a wind energy project in India. Not any more.

Earlier, a set of economic incentives and quick processing of projects ensured private parties came in droves to invest in the wind energy projects. The initiative taken in yester years has ensured that Tamil Nadu today has the highest installed wind power capacity in India, 812.6 megawatt (mw). But ever since the expiry of the Union ministry of non-conventional energy sources' ( mnes ) five-year policy on wind energy on November 30, 2000 the sector has trudged along like a terminal patient struggling to survive (see graph: Winds of change ).

Under the 1995 wind energy policy, Tamil Nadu Electricity Board ( tneb ) began by paying the private wind energy producers Rs 2.25 per unit. The rate was increased by five per cent each year. At the time of the policy's expiry in 2000 the rate had risen to Rs 2.76 per unit. But once the policy expired tneb instead of increasing the rates, brought them to the original 1995 level for all private producers applying after November 30, 2001. tneb notified that the producers having applied for noc s after the expiry of previous policy would be paid Rs 2.25 per unit of power produced. The notification issued also raised the reactive power charges to Rs 1 per unit from Rs 0.50 per unit paid earlier. Reactive power is the power consumed by the project for it to function. Banking, (a process of depositing power at one location and withdrawing it later), which was earlier allowed for a one-year period deposit, is now reduced to a month. The surplus energy at the end of this banking period will be treated as lapsed.

Interestingly the notification was meant to be a stopgap arrangement till the announcement of a new policy by March 31, 2001. But with the assembly elections fervour having engulfed the state till recently, nothing has happened on the front. To add to the woes of the private wind power generators tneb has stopped issuing noc s from March 31, 2001. Reports in the media say investment worth about Rs 150 crores is stuck in the pipeline. The result: while new entrants feel discouraged, those already producing wind energy in Tamil Nadu have been subjected to two different sets of rules, apparently f or no particular reason.
But, R Poornalingam, chairperson of tneb , jusitifies the notification. He claims wind energy production is too unreliable to be given special attention. He claims the production graphs shows wide variations during the year. He complains, " tneb is a commercial enterprise, it cannot continue to suffer losses. Despite the fluctuating productivity of wind energy, I pay Rs 5 crore per megawatt to wind power producers while I pay Rs 4 crore to the coal sector, a more reliable source of power."

The wind producers counter the allegations of being dead wood. They claim tneb , out of its annual budget of Rs 6,000 crore, allots just Rs 48 crore for purchase of wind power -- less than one per cent of the budget. This too it do not pay on time. The board is still to pay Rs 22 crore to the producers. This is confirmed by the minutes of the second meeting of the Consultative Group of Wind Power Sector, held on February 6, 2001, where the mnes states that 'the total commitment of tneb for purchase of wind power is about 48 crore per annum...of this Rs 22 crore is still outstanding.'

The private producers accuse tneb of blaming them for its political masters' follies. V V Shanta Raman, secretary, Indian Wind Turbine Manufacturers Association ( iwtma ), Tamil Nadu, says the state provides free electricity to the agricultural community. Officials estimate that this comprises around 29 per cent of the total power produced in the state. The cost of this freebie is to be borne by tseb , which unable to raise its voice against the profligate state government, instead blames the private power producers. Poornalingam wants mnes to subsidise the wind power projects rather than ask the tneb to support them.

A senior beauracrat in the department of energy, Tamil Nadu, says wind energy projects don't need to be subsidised at all as he believes they are profitable ventures even without the economic crutches. And, he adds, Tamil Nadu already exceeds its target of producing 10 per cent of its energy from renewable sources. "We cannot continue to pamper the wind power producers," he says.

The producers in the state are also hampered by rules that prohibit direct sale of power to anyone other than tneb. Sailo defends the policy and says if third party sales were allowed, tneb would suffer greater losses. "Industries are our biggest customers and if power is sold directly to them, then it would be a major loss for us," he adds.

Officials at the mnes also narrate their grouse against the flyby night operators who put up plants to claim 100 per cent depreciation in the first year of operation, make a neat profit and then shut down the project under one pretext or the other. They claim the producers take illegitimate advantage of the existing income tax rules.

While everyone involved speak self righteously, mired in this war of words, Tamil Nadu's wind energy sector waits and hopes for a better tomorrow.