AS drinking water sources become scarce, the dependence on groundwater increases. But groundwater is brackish in many places and the technologies to make salty water potable are high on energy consumption, inputs and maintenance costs.

Scientists have now found a cost- effective device to desalinate water. They have taken their cue from one of the guiding principles of water purification—removing salt ions from water.

To make the device, a team led by Maarten Biesheuvel from Wageningen University in the Netherlands took two thin, inexpensive graphite rods or wires, which are highly conductive. The outer surface of the wires was coated with a porous carbon electrode layer. This turned one wire into anode (positively charged electrode) and the other into cathode (negatively charged electrode). Each wire was then pressed against a copper strip and clamped onto a plastic holder. The wire pairs were then dipped into saline water and a voltage between one to two volts applied. 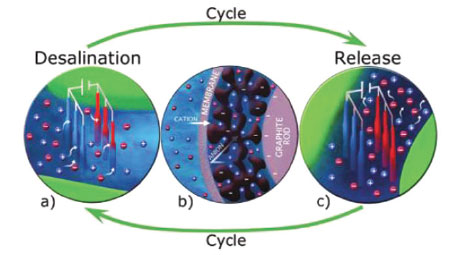 This causes the negatively charged chlorine ions to get stored at the positively charged anode end and the positively charged sodium ions to get stored at the negatively charged cathode end without undergoing any chemical change. The wire pair was then inserted into wastewater and current removed. This allows the stored ions to be released into wastewater. By repeating this cycle about eight times, the researchers found that the salt concentration of the original brackish water of 20 millimolars (mM) was reduced to about 7 mM. Potable water is considered fit for drinking if it has salinity less than 15 mM.

When asked if this method can be used to treat water with 100 mM of salt, Biesheuvel said, “Higher the salinity, the more you need to shuttle the wires back and forth, or have more of those wires working together, so 100 mM would be the upper limit.” This technique is inexpensive and since the voltage required is low, it is perfectly compatible with solar panels and can be used at off-grid or remote locations, he adds.

The method also does away with the need to mix brine with the water being treated as in other desalination processes. It limits the efficiency of other techniques as brine in itself is salty.

The study was published in the May 29 issue of Journal of Physical Chemistry Letters.