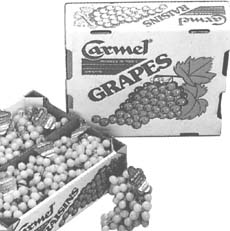 those who want to produce aromatic wine should head for Israel. Grapes grown in the saline region of Negev Desert produce more aromatic wine than those that have been conventionally cultivated. Ben-Ami Bravdo of the Hebrew University of Jerusalem experimented with different root stocks. He found that a type called Ruggeri was able to grow in saline water, without passing on too much salt to the fruit. He then grafted different grape varieties onto the root stock and tested their juice and wine for both sugar content and for more volatile compounds that give wine its aroma.

Bravdo found that a large number of these compounds appeared in considerably higher quantities in this wine than in conventional wines made from grapes grown in fresh water. But a strong aroma does not necessarily mean that the wine is producing more of the volatile compounds, said Bravdo. Some of the compounds are attached to sugar molecules, while others are free. The later can evaporate contributing to the distinctive smell of the wine. Increasing the amount of salt in the grapes tends to convert fixed volatile compounds into free ones, thus creating a stronger aroma.

Vintners in Negev are quite excited by Bravdo's findings. Even though the area gets little rainfall, it has a large reserve of groundwater, enough for 200 years of intensive agriculture in the region. However, the groundwater is moderately saline.

The first small commercial vintage of red and white wines from the Negev, made from 1988 crop, is now being sold in Israel. Lewis Pesko, a winemaker at Tishbi Estates Wineries in Binyamina, Israel, says that he has had "excellent results" from the grapes. But he added that other factors, such as Negev's arid climate, could also contribute to the quality of the wine.