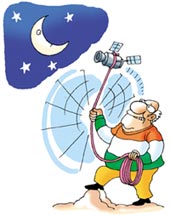 The Indian Space Research Organisation (isro) has requested the Union government to approve its project aimed at dispatching an unmanned spacecraft to orbit the moon. The organisation expects clearance "in the next few months".

The Rs 385-crore mission is expected to culminate in 2008. A group of 70 premier scientists had met in April 2003 to discuss the project. They ended up endorsing it overwhelmingly. "The moon mission is timely and appropriate for India to undertake," said K Kasturirangan, chairperson of isro. He added that the exciting project would serve to attract talented youngsters to the field of space research. Titled Somayana-1, the operation is expected to be the forerunner of isro's interplanetary explorations in the future. The mission aims to launch a low-altitude orbiter that will revolve around the moon, capturing images with high spatial and spectral resolution cameras.