Indian scientists have developed a kit to detect a disease caused by tapeworm larvae, which doctors often confuse with tuberculosis of the brain. 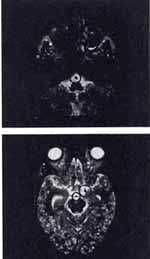 A COMMON parasitic disease of the human nervous system, neurocysticercosis, is often mistaken for tuberculosis of the brain. And, because doctors are unable to distinguish between the two, the disease claims numerous lives each year.

But now, scientists at the Astra Research Centre India and the National Institute for Mental Health and Neurosciences, both in Bangalore, have developed a kit for quick and accurate detection of the disease. The kit is being field tested in Bombay by the pharmaceutical company Tata Merind and is likely to be marketed soon.

Prevalent in most parts of the country, neurocysticercosis is transmitted by tapeworm (Taenia solium) eggs that are usually ingested along with unhygienic food, especially unwashed vegetables. The eggs develop into one-cm-long larvae known as Cysticercus cellulosae that form a cyst in the human brain. To detect the disease, doctors had to depend on expensive CAT scans, which revealed only a dark spot on the brain, similar to that formed in tuberculous meningitis, and so this technique could not be used to differentiate between the two diseases.

If the infection can be detected early, the worms can be killed by drugs or the cysts can be removed surgically. But the larvae are wily survivors. They excrete several chemicals, some of which fool the immune system and "influence" it not to attack the cyst. Experts suspect a patient suffers symptoms of the disease only when the well-entrenched larvae are about to die. The larvae, weakened by the attack from the immune system, responds by secreting chemicals that cause a swelling of the brain and even death.


The kit reveals the presence of the larvae by detecting antibodies produced by the immune system in response to these dying larval secretions. These antibodies can be found in a victim's cerebrospinal fluid that bathes the brain and the spinal cord. Says B V Ravi Kumar, one of the scientists who developed the kit, "The neurologist simply has to extract the cerebrospinal fluid and test it for antibodies, which can be easily detected."