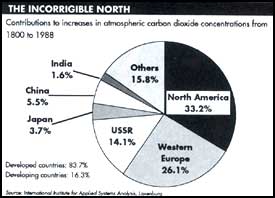 WITH the European Community's carbon dioxide emissions rising and the developing countries reluctant to bail them out, industrialised countries found themselves jammed into a tight corner at the ninth meeting of the negotiations on the Climate Change Convention held in Geneva.

Right at the start of the February 7-18 meeting, Bert Bolin, chairperson of the Intergovernmental Panel on Climate Change, a scientific body set up to advise the negotiators, declared that the industrialised countries' target of stabilising greenhouse gas emissions by 2000 was "very modest" and asked for reductions "well below the current levels." Later, the Group of 77 refused to endorse a proposal by industrialised countries to get emission credits for providing finance and technology to the developing countries for reducing their greenhouse gas emissions (See box).
The EC's own projections show that it will be unable to cut emissions to 1990 levels by 2000, as required by the convention. On the contrary, the EC's carbon dioxide emissions are expected to increase by 12 per cent by the year 2000 (See box).

A concerned German government asked for a "protocol" for reducing all greenhouse gas emissions to be ready by March 1995, when it hosts the first conference of convention signatories.

The Danish government asked its pledge a 20 per cent reduction in emissions from 1990 levels by the year 2005. Danish environment minister Svend Auken had earlier committed his country to this target to "prove the importance of furthering this process".
The first item discussed in Geneva was the Global Environmental Facility (GEF). The US took the lead, voicing concern over the breakdown of GEF negotiations in December 1993 and the final evaluation report, which states, "The promise of this significant new fund will not be realised unless there are are fundamental changes in the GEF strategies and relationships of its organisational components. The report asked for clear lines of accountability to be established for the GEF, a matter of concern for developing countries, which accuse the donor countries of 'dominating the fund. cording to GEF administrator Ian Anderson, it has been agreed to have a two-tier structure for the GEF with an assembly open to all countries and a smaller, constituency-based council.

But three key issues that could not be resolved were the chairpersonship of the council, the number and distribution of constituencies on the council and the qualified majority required if there is a vote.

Anderson said that after December, donor countries expressed strong support for a core fund of $2 billion for GEF. He said G-77 countries were "also keen to re-engage in negotiations." The GEF restructuring plan would be ready for the member governments' approval at the GEF participants assembly, which was to start March 14 in Geneva.
The Geneva meeting saw developing countries led by Tunisia and China charging industrialised nations with backsliding from the $125 billion agreed to in Agenda 21 and the $3.5 billion promised at the Beijing GEF meeting.

As it dawned on the delegates that money from GEF would be limited, the debate got stuck on what the priorities and eligibility should be for funding. The wrangling was mainly between the former East European countries and the developing countries. The developing countries also wanted the costs of changing their technology as a result of climate change to be included in the funding, a stand opposed by the industrialised countries.

Meanwhile, Northern environmentalists began lobbying for bringing even other forms of aid to follow the funding criteria of the climate change convention. In this regard, mention was made of the proposed World Bank loan to India's National Thermal Power Corp for 15 coal-fired power plants. They contend that loans that lead to an increase in developing country emissions should be discouraged.

"The continuous debate on money shows the anxiety of developing countries over reduced funds and increasing blame of emissions being directed towards them," said a developing country delegate on condition of anonymity.