Although the G7 donors (USA, Canada, France, Germany, Italy, UK and Japan) still provide far more assistance to poor countries, the foreign assistance by BRICS countries between 2005 and 2010 was 10 times higher than that of the G7, notes the report ‘Shifting Paradigm: How the BRICS are reshaping global health and development’ by Global Health Strategies Initiatives (GHSI), an international non-profit. 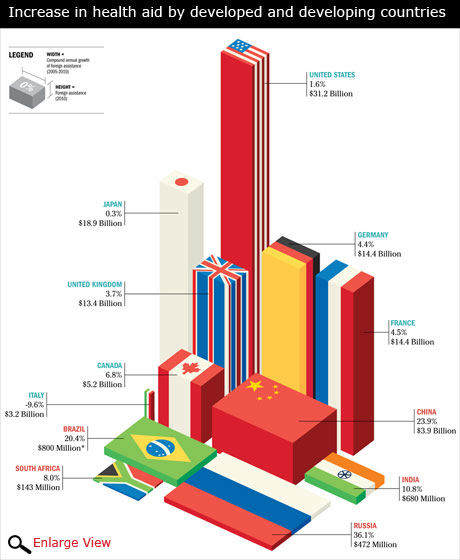 Over this period, India’s total foreign assistance grew at an estimated 7.4 per cent annually between 2004 and 2010, from approximately US $443 million to US $680 million. It has given maximum foreign assistance for health improvement to Nepal and Bhutan. It has also helped Afghanistan and several African countries. India’s assistance to Afghanistan now is more than US $1 billion. Bulk of the assistance comes in the area of health infrastructure development.

The report notes that since BRICS are also developing countries and face health challenges of their own, thus their interests and goals in supporting global health and development efforts are tempered by domestic concerns.

“Though the BRICS countries have been giving foreign assistance for decades, their assistance has grown rapidly with their economies. Together these countries can have a major influence globally, especially in the field of health where most of these countries have common health issues of tuberculosis, HIV, non-communicable diseases and polio,” says David Gold, co-executive director, GHSI.

“India has made great advances in eliminating polio. They can now assist other polio endemic countries and show them the way forward,” says
Anjali Nayyar, co-executive director, GHSI. Brazil has introduced a system of cash transfers and South Africa has a new geneXpert technology for TB diagnosis which india can use, she adds.

The report also highlights that India has excelled in the field of drug and vaccine manufacturing and has succeeded in providing them cheap to the poor countries in the world. Most of this production, however, has been in the private drug and vaccine manufacturing units, admits Gold. Indian companies manufacture between 60 per cent and 80 per cent of all vaccines procured by the UN agencies, making it the largest provider of affordable, high quality vaccines for developing countries. India produces 213 WHO pre-qualified vaccines.