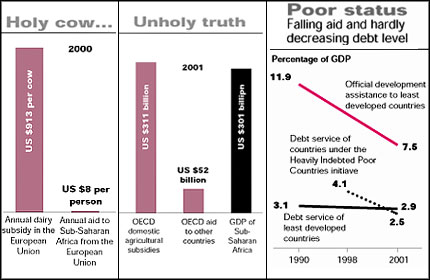 • The catch: this goal has no time-bound, quantified indicators to hold actors to account

• To achieve this goal, developed countries must provide poor countries more aid, faster debt relief and open their markets to them

• In 1970, rich countries pledged 0.7 per cent of their gross national product for global development. But in reality, their official development assistance (ODA) fell from 0.33 per cent to 0.22 per cent between 1990 and 2001

• Donor countries need to reduce the amount of tied aid, which restrains efficient allocation of assistance. Tied aid is 25 per cent less effective than untied aid

• Achieving all 8 goals will require at least US $50 billion a year over the US $56.5 billion available currently. The need for rich countries to deliver is not a matter of charity but policy