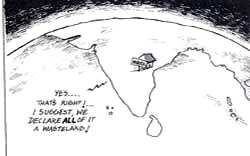 Different estimates of the extent of the country's wastelands area has forced the ministry of rural development to call for a remapping of such areas. The ministry's wasteland development department has asked the National Remote Sensing Agency (NRSA) in Hyderabad to prepare a detailed map of the wastelands by the end of 1993.

The information will be made available to the corporate sector and financial institutions to help them draw up plans and channelise funds for wasteland development. The ministry is also offering various incentives, such as tax holidays and long-term leases on the lands, to attract corporate investment.

However, there are differences in the data provided by NRSA and the Society for Promotion of Wasteland Development (SPWD) in Delhi. While NRSA satellites indicate the extent of wastelands in the country is 100 million ha, SPWD contends it is as high as 129 million ha. SPWD's I K Mukherji says, "At least a fifth of the wastelands are under subsistence farming and meets the basic needs of at least a quarter of the rural poor." NRSA estimates do not include this.

According to Mukherji, the government's plans to hand over wastelands development to industrial houses will deprive the poor of their meagre livelihood. He says, "Unless the government finds a way to involve the local people in planting and caring for the saplings, nobody can successfully protect and regenerate wastelands."