Devices of fun and comfort 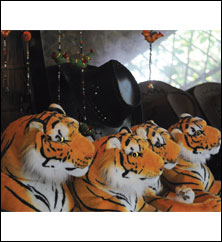 WILDLIFE tourism’s underbelly was exposed in Bandhavgarh National Park last month when a vehicle with tourists craving for a nocturnal sighting of the tiger hit the animal. The influential tourists had managed to stay in the park after it closed.

The animal died a few hours later in front of a group of tourists visiting the park early morning.

Tourism was once considered ideal for both conservation and commercial use of our forest. It no longer holds. The problem emanates from how governments and conservationists have promoted tiger tourism. A little over a decade ago, the forest department’s rickety jeeps were the only way to catch a glimpse of a tiger. Sightings were rare, and the experience was not at all touristy.

Today, resorts guarantee a sight of the tiger and also promise a glass of champagne near a swimming pool to cap the exhilaration. At Corbett National Park, resorts can provide anything from swimming pools to discotheques to organizing events like rave parties. Many of these resorts have electric fencing around them and are situated close to the core of the sanctuary.

Since tiger tourism is big money, tourists have to sight a tiger. The moment the animal is sighted, all tourist vehicles in the park are alerted and they mill around the tiger making it tense. There have also been instances where baits have been used to lure a tiger.

Tourism may be a necessary evil, but it has to be contained to sustainable levels. Studies to ascertain stress from tourism and related pathological malaises among tigers must be done before deciding how a tourist or a guide must conduct inside a park. The Union ministries of environment and forest and tourism must draw up a proper set of regulations to minimize this damage.

In an 1859 article, novelist Harriet Beecher Stowe wrote, “Formerly in New England, soap was made in families; now we buy from the shop.” The abolitionist was lauding the LeBlanc process. It freed soap-making of tiring tasks like cutting trees, burning wood, leaching ashes, evaporating water from the wood ash lye, and finally burning impurities in a kiln.

For long a critic of the US economy, Beecher Stowe believed commercial soap production would reduce work for slaves, especially slave women. About 150 years later, the Vatican extolled another laundry industry product: the washing machine. The Pontiff wrote, “The washing machine has done more to liberate woman than the pill or the right to work.”

It would be easy to bracket Beecher Stowe and the Vatican. But the Pontiff’s praise for the washing machine means advances in laundry technology have belied the abolitionist’s hopes. Today women come home from work tired, make a cup of instant coffee and dump the laundry in the washing machine so that their children and husband have clean clothes for the next day.

Modern devices have a way of making us feel free from toil. But work still takes the lion’s share of our day. We wear out car tyres travelling same roads for years. For the lesser known routes, there is Google search on Internetenabled phones.

It is easy to slam the Internet, or Google, when it fails us. But it will be more worthwhile to see how people use the Internet. The so-called information revolution has given weight to many voices. It has also turned many of us into senseless data consumers. Like the LeBlanc soap and the washing machine, the Net is after all technology. Its outcome depends on the uses societies and individuals find for technology.