Majority of residents may not be eligible for free housing 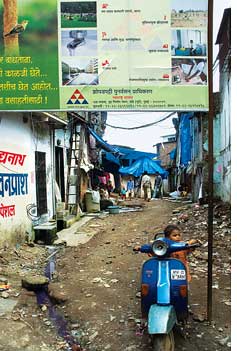 maharashtra governments Dharavi redevelopment project that aims to house slum residents in multi-storey tenements may render more than half the families in the slum area homeless. A recent survey in one section of Dharavi slum by the Mumbai municipality showed over 60 per cent residents were ineligible for free housing; only those who can prove they settled in the slum by January 1, 2000, are eligible.

The survey findings, leaked to the media in November, increased resentment among residents as many have been staying in the slum as tenants for decades and do not have proof of residence. Now even the government survey shows majority of the people in Dharavi are ineligible. What will happen to tenants and families in the below- poverty-line category? asked S G James, resident of Dharavi and member of National Slum Dwellers Federation, a coalition of non-profits.As per the plan, the whole of Dharavi, spread over 144 hectares, would be divided into five sectors; each would be handed over to a private builder for redevelopment.

The municipality survey, carried out in the pocket demarcated as sector four, showed only 3,127 out of the 8,478 surveyed families were eligible. It was an internal exercise. The data collected was handed over to the Dharavi Redevelopment Authority (dra), a municipal official said.

Gautam Chatterjee, officer on special duty with dra, admitted the 2000 cut-off date is creating problems. Urban planning experts said the project is not feasible. The area needs to be broken into smaller clusters based on existing natural and social boundaries and then redeveloped with active participation of the local residents, said Anirudh Paul, director of an architecture college in Mumbai. Paul is a member of the committee set up by the state government to advise it on the project (see Redevelopment disguises landgrab, Down To Earth, August 31, 2009). Paul has prepared an alternative master plan for sector four with the help of residents by dividing the sector into 25 clusters.