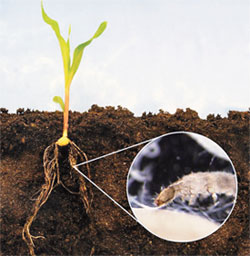 AT ANY time, maize plants are in danger of being dismembered by the vicious western corn rootworm larvae. When under attack, the plants call the emergency service for help. This service is provided by beneficial nematode worms that are specialized in killing the enemy. The plant secretes a volatile compound to call for their help.

The larvae of the western corn rootworm (Diabrotica virgifera virgifera) are destructive maize crop pests. They go feed on the plant's root hairs and bore deeper devouring the roots inside out. The plant does not stand a chance as it loses its nutrients supplier. So far crop rotation, pesticides and genetically modified maize crops have been used to keep the enemy at bay. For a farmer who specializes in maize, rotating crops is not an exciting option. Pesticides come with their side-effects. Chlothianidine has been used for these pests; it has also caused large-scale honeybee deaths in Germany. As for genetically modified crops, scientists predict that the worm will develop resistance to them sooner or later.

"The best way is to figure out how they protect themselves. We found that plants use chemicals that call bugs for help," said Eric Schmelz from the US Department of Agriculture.

The European maize varieties emit the compound trans-beta-caryophyllene (EC) to beckon for help. But the North American varieties have lost their ability to make the call--an unfortunate event since the rootworm is infamous for causing the most destruction in the US. A team led by Max Planck Institute for Chemical Ecology, Germany, introduced an EC-generating gene from oregano into the US varieties.

Bruce Hibbard from the United States Department of Agriculture assessed the plants' response to the genetic addition in a maize field. The plants effectively summoned the protective nematode Heterorhabditis megidis. In rows of EC-producing maize plants, 60 per cent fewerrootworm beetles could be sighted; most of the larvae were killed and eaten.

The experiment was successful. But the plants turned into continuous emitters of the compound. This might reduce the gene's efficacy. False calls often leave one without help at the time of need. The gene needs modification. "We need to make sure that the compound is produced when the plant is attacked by the pest," said Ted Turlings from the University of Neuchtel, Switzerland.