Microchips are made using artificial diamond 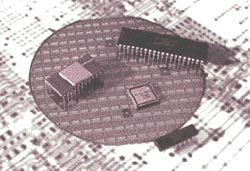 a team of scientists, based in Germany, has developed a technique to make diamond films that could be used to produce microchips. From the very beginning most integrated circuit have been made using ultra pure silicon. Though cheap and versatile, silicon chips have certain disadvantages that make them unsuitable for specific applications. For one, they fail at around 150C and therefore can't be used in high temperature environs.

Synthetic diamond in its pure form is not a good semiconductor. But atoms of other materials can easily be mixed with diamond's atoms, making it act like a semiconductor. However, the thin films made of diamonds in this way are not good for chip making because 'grain boundaries' formed during the mixing do not allow the current to flow easily.

M Schreck and his co-researchers have found a way around this. They scattered seeds of diamond crystals on which the crystals could grow. The diamond films were made by chemical vapour deposition. A carbon rich vapour was used to deposit carbon atoms on the iridium surface charged to a high voltage. Charging the iridium surface prevented formation of grain boundaries ( Applied Physics Letters , Vol 78, p92).

Diamond devices, apart from being able to withstand temperatures as high as 500C can also be used with high voltages. Commercial application of the technology is still a distant prospect.