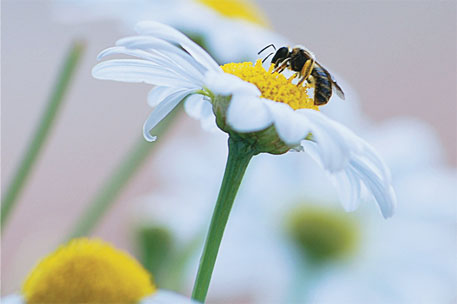 HONEYBEES play a crucial role in pollination, which lies at the crux of fruit formation and seed setting in plants.Ã”Ã‡ÃªUnfortunately, anthropogenic activities are increasingly threatening their survival.

Tracey Newman and her colleagues from the Institute for Life Sciences, University of Southampton, UK, have reported thatÃ”Ã‡Ãªdiesel exhausts interfere with the floral odours that help bees locate flowers for sipping nectar. The scientists created a synthetic odour inspired by the natural floral odour emitted from rapeseed plant for the test. This consisted of eight chemicals from the natural odour that elicited the strongest response from bees. The odour was released into two vessels—one that contained clean air and second that contained air mixed with diesel exhaust. One minute of exposure to diesel exhaust lowered four of the chemicals, with two components, α-farnesene and α-terpinene, becoming undetectable. To train honeybees to become familiar with the synthetic floral odour blend, the scientists made use of their ability to extends its proboscis when it comes into contact with food. Bees that were trained to respond to the synthetic mixture failed to respond when they were exposed to a mixture that lacked α-farnesene and α-terpinene. It was also noticed that of all the chemicals in the diesel exhaust, oxides of nitrogen (NOx) appeared to be the most damaging to floral scents.

“The public needs to be made aware of the impact of such pollutants. It is also necessary to look at such studies in the right perspective and make sure that focus is not lost from other problems that the beekeeping industry in India is facing. Adoption of scientific methods of bee-keeping, development of better strains and keeping diseases in check are some of the areas bee-keepers need to concentrate on,” says Pardeep Chhuneja, entomologist at Punjab Agricultural University, Ludhiana.

Axel Brockmann from National Centre for Biological Sciences, Bengaluru, says, “The paper is important when it comes to lawsuits, in caseÃ”Ã‡Ãªa state or a country decides to decrease pollution thresholds and car or transportation companies oppose that.”

The paper was published in the October issue of Scientific Reports.