Manufacturers of diesel engines for generator sets are a divided lot today. Battlelines have been drawn between those who have complied with the emission standards set by the Union ministry of environment and forests, and those who want the July 1, 2003, deadline for their implementation extended 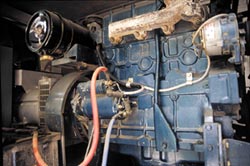 manufacturers of diesel engines for generator sets are a divided lot today. Battlelines have been drawn between those who have complied with the emission standards set by the Union ministry of environment and forests (moef), and those who want the July 1, 2003, deadline for their implementation extended. The guidelines are specified under the Environment (Protection) Second Amendment Rules, 2002.

In stark contrast, other major manufacturers of diesel engines are disgruntled that Baalu is even considering any relaxation in the deadline. One such player, Pune-based Kirloskar Oil Engines Limited (koel), wrote a letter to the minister informing him that major manufacturers of diesel engines had already confirmed to the Central Pollution Control Board (cpcb) their readiness to meet the norms. Apart from koel itself, the companies mentioned include Ashok Leyland, Cummins India Limited, and Mahindra and Mahindra. "If the government relaxes the deadline further, it would be tantamount to placing a few manufacturers above public health," says a senior koel official.

Significantly, the moef notified these norms in 2002 after dithering for a long time. In fact, the ministry has acceded to the manufacturers' demands once and extended the deadline from January 1 to July 1, 2003 (see: "Generating controversy", August 15, 2002). Experts fear that this would be repeated again. cpcb sources disclose that in March 2003, Greaves and idema had approached moef for more time. The matter was then referred to the technical committee (tc), which unanimously concluded: "The date of implementation of the emission standards for new diesel engines for genset applications should not be deferred." The tc's verdict has been communicated to Baalu.

Meanwhile, industry sources suspect that a Rs 65-crore order, which Greaves has received from the Indian army, is at the root of the controversy. "If the rules are implemented, the deal may run into trouble. The cost of the new products would shoot up, which will affect the company's profitability," says a genset expert. But B M Sundareshan, general manager (co-ordination), Greaves Limited, New Delhi, rebuts the allegation: "The order should not be linked with the proposed extension." He, however, refused to comment on the company's stand calling the issue "extremely controversial". In idema's case, experts aver that since many of its members manufacture diesel engines locally using obsolete technology, they will be unable to meet the new emission norms.

One can only wait and watch whether the authorities pander to a handful of manufacturers or safeguard public health. As of now, the ball is in Baalu's court.