More than 2.5 billion adults worldwide do not have formal bank accounts, making it harder to alleviate inequality and spur economic growth. About 60 per cent of this population lives in developing economies. Governments in these countries should step up efforts to boost the use of digital payments to increase financial inclusion, empower women and spur economic growth, says a new report by the World Bank Development Research Group.

With the mobile phone revolution in full swing and pervasive Internet connection, the world is migrating from cash and credit cards to digital payments, such as mobile money, pre-paid debit cards and electronic bank transfers. “Governments in the G20 (Group of 20 major economies) should target digital payments as a way to help people access basic banking facilities, which it says will encourage saving while reducing theft and corruption,” says the report The Opportunities of Digitising Payments released on August 28. 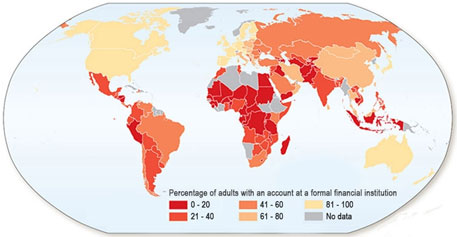 Citing research in countries including Brazil, India, Kenya, Niger, the Philippines and South Africa, the study says digital payment services can reduce the cost of sending money both domestically and across borders, as well as transfer funds more quickly. Across the world many poor people rely on remittance transfers, which add up to about US $514bn a year. “Rapid development and extension of digital platforms and digital payments can provide the speed, security, transparency and cost efficiency needed to increase financial inclusion at the scale required to achieve G20 goals,” says the report.

Some are, however, concerned that digital payments are vulnerable to electronic theft and can be intercepted.

The report will be discussed at a G20 meeting next month and calls on members of the group to push for specific measures to spur non-cash payments. Chief among these is the digitisation of government payments and receipts to create a foundation upon which the private sector can build. The report calls on governments to look into creating favourable regulatory regimes that encourage competition and to work with the private sector to build technical platforms on which services can be built.

"The evidence shows that private sector firms will innovate and citizens will quickly learn to use and appreciate digital payments,” says Geoffrey Lamb, chief economic and policy advisor to co-chairs and CEO of the Bill & Melinda Gates Foundation, which sponsored the study. “But we need governments to establish the vision, the digital platforms and the regulatory assurance to pull the hundreds of millions of currently excluded people into full participation in the modern economy.”