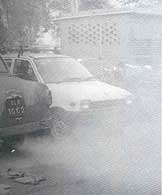 THE UNION transport ministry maintains it is committed to restricting vehicular pollution. However, a notification on automobile emission levels issued by the government in the first week of November, dilutes standards both in overall terms and in almost every vehicle category.

For instance, the limit for carbon monoxide emissions by two-wheelers, which environmentalists expected to be fixed at 3.6 gm per kilometre, has been stretched to 4.5 gm per km. Similarly, standards have been reduced for combined emissions of hydrocarbon and oxides of nitrogen for various categories of cars.

The notification also grants an automobile manufacturers' demand that pollution checks be made after a "warm start", contrary to an environment ministry recommendation that "cold starts" be subjected to checks because emissions from colder engines are higher due to lower combustion efficiencies.

The transport ministry's earlier proposals had envisaged bringing the standards into force by 1995 and replacing them by even more stringent ones in 2000. However, the latest notification will come into force in 1996 and there is no indication of further stringency.

Environment ministry officials point out the dilution in standards was necessitated because manufacturers said they were constrained by existing technological levels. "We fully support the new notification," says G V Krishnan, additional-director in the ministry. He contends that even the diluted standards would go a long way in curbing traffic pollution in Indian cities.