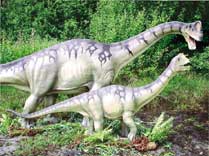 Over 1,000 fossils dating about 150 million years have been excavated from the Harz mountains. The fossils were thought to be of juvenile sauropods -- a family of dinosaurs that includes the 90-tonne, 45-metre long seismosaurus. But palaeontologist Martin Sander says the bones came from six-metre dinosaurs weighing about a tonne.

Compressed marks, like tree marks, were found under fossil bones, says Sander. "The dinosaurs must have been fully grown when they died," he says in a report in Nature (Vol 441, No 7094).