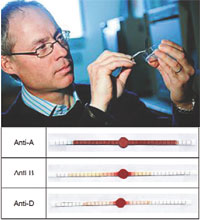 IN 1930, when Karl Landsteiner was awarded the Nobel Prize for discovering blood groups, little did he know that a century later the task requiring elaborate lab apparatus could be performed on a stamp-sized paper.

Researchers at the Monash University in Australia have developed a dipstick-test for instantly determining a person’s blood type.

Knowledge of blood type is essential for a safe blood transfusion. People have one of four blood groups, based on the antigens on red blood cells (RBC): A, B, AB and O. If blood groups are not compatible, blood clots as an immunological reaction between antibodies in the receiver’s blood and antigens in the donor’s blood. This can trigger a fatal reaction.

The dipstick test is based on the same principle conventional blood typing is done in the lab. The paper has three arms etched, each infused with an antibody that matches with the compatible blood type. When a drop of blood is placed on the paper, it spreads along the arms but coagulates when meets an incompatible antibody; the blood drop forms a visible dot. The arm in which blood flows unrestricted indicates the type, the scientists noted in Analytical Chemistry in June. The test is as accurate as lab tests and costs a few US cents, said Gill Garnier of Australian Pulp and Paper Institute, a unit of the university.

Experts believe the diagnostic is a boon for developing countries where blood typing is not widely available and are expensive. “The test would reduce the need of technicians during emergencies and health camps,” said Rachna Agarwal, biochemist with the Institute of Human Behaviour and Allied Sciences, Delhi. It is biodegradable and can be disposed of easily, she added.