Where would homeless children broadcast their view of the world? The streets, of course, says SOPAN JOSHI 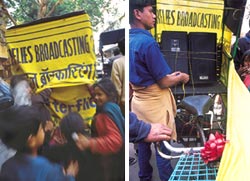 February 10, 2004 / New Delhi Railway Station
UNSUSPECTING PASSENGERS: A Toyota Qualis stops in front of a series of indomitable white Ambassador cars in the vip parking lot. 'Butterflies Broadcasting Children' (bbc), declares a yellow banner. About 10 children and an adult step out and begin to set up a public address system with a studied, though amateur, efficiency. And the public address system begins to blare.

It sounds like a radio programme. A signature tune is followed by interviews on what people think about street children. Then there is a song, the lyrics of which include: aish kari tumne / paida hue hum... (you had a good time / and we were born...). Bystanders are curious. Sunil Kumar, the adult accompanying the children, informs they are from Butterflies, a non-governmental organisation (ngo) with several projects for street children and child workers. It also helps them make their own radio programmes. The 'correspondents' zip out voice recorders to interview bystanders. Some are sympathetic. Others are cynical. But when a mike is projected, stray remarks become more circumspect. The situation has all the symptoms of a discussion.

Same day / Karol Bagh
TRAFFIC OF IDEAS: The lanes are too congested for the Toyota. So a rickshaw is hired and the speakers mounted. Several street children outside the bbc fold join them. The crowd swells. The rickshaw leaves behind a trail of murmurs. Several mini-discussions begin over cups of tea at tea stalls. A young boy working at a stall steals a few moment to hear. The stall owner screams out his name and he runs back. The broadcast is a runaway success.

Same day / Hanuman Mandir
CHARGE OF THE LIGHT BRIGADE: It is Tuesday, the day of Hanuman, the trouble-shooter of the Hindu pantheon. The bbc van stops close to a long queue of garland-wielders. Some street children from the neighbourhood see this as a breach of territory. Most are visibly high on narcotics. Soon, a heated scuffle breaks out between two eunuchs. Policemen try to separate them, but with a distanced caution. The bbc broadcast is lost in the din. Their's is a call that even Hanuman doesn't seem to answer. The radio journalists move on.

February 11 / A night shelter in Okhla
THE EDITORIAL MEETING: Foot odour assaults the nasal passage as about 20 bbc children take off their footwear to join the bbc editorial meeting. There are those who ran away from having to go to school. And those (like Anuj of Ghaziabad) who ran away because relations won't let them attend school. A chubby Arun ran away from his house in Agra after his mother beat him. Pawan of Jaipur escaped from home after a fight with his father. And so have Imran, Bilal, Sonu, Sahir...

Anuj, a sensitive and well-read boy, chairs the meet. It is obvious who is the first among equals in bbc -- Pappu, 16, is a veritable Heathcliffe. Dark, broody and temperamental, he has an air of seriousness that is intimidating. He snaps at noisy children, asking them to leave if they don't want to participate.

The first item on the agenda is a review of the last programme. Pappu says it would help to change the content of the otherwise repetitive tape. Deepak suggests they should do more detailed interviews with severely abused street children. Ritu and Priya -- schoolgirls who work part-time for bbc -- complain they have to do most of the interviews. Arun rebuts that people talk all too readily when interviewed by girls. He gives the example of how an old man misbehaved with him at Jama Masjid. Sonu, ever fidgety and mischievous, says he should have given the old man back as good as he got. Then there is a discussion on people to interview for the next programme. There is mention of how N Ram, editor-in-chief of The Hindu, stood them up at the World Social Forum in Mumbai. Assignments are allocated, deadlines argued over.

February 17 / Kashmiri gate and Jama Masjid
ON THE RECORD: The station-in-charge of the Inter State Bus Terminal, sub-inspector Harish Chander, is hesitant and in a hurry. But he relents. Why are street children afraid of the police, he is asked. Most of them are runaways, and they fear the police would send them back, he answers. The station house officer of Jama Masjid police station, Gir Raj Singh, says street children are often involved in petty crime. The bbc interviewer asks him about white-collar crime. Political correctness ensues.

Pappu steps out and recalls policemen snatching his money. At a very young age, he started coming to Delhi from Katihar with his parents, daily wage labourers. Four years ago, his mother died in a rail accident, her body badly dismembered. His father turned to begging, and disappeared soon after. Since then, he has been on the street. He narrates stories of how street children get sexually abused by either elder children or paedophiles who lure them with food: "It is difficult to get food; much easier to get drugs." He talks freely about the various intoxicants he used, the petty thefts he committed to watch films. But all that is behind him now. He is a bbc radio journalist by the day and a rag picker by night. Why? "I don't get any money for this, only the expenses are met. I do this for the sake of my self, for dignity, for children who might go through what I underwent." He stops to note that there is a wedding happening in the park adjoining his night shelter in Fatehpuri. "There is money to be made tonight, cleaning the rubbish," he hopes. Then, he realises, two of the reporters are lost in the crowd. He goes looking for them.

February 19 / Butterflies Office, Green Park Ext
MEDIATORS: Shahid Jamal is from the Jamia Millia Islamia's Mass Communication Research Centre. He is here to help the bbc children in post-production and pre-production duties, and is teaching them non-linear sound editing on the computer. He admits that the language that the children use in their programmes is very formal, not very good for communication on the street. But, he explains, they are associated with an ngo that has to use the formal language. Besides, Jamal loathes the non-serious language used by fm radio stations.

Rita Panicker, director of Butterflies, is well aware of the language problem. She had arranged for professionals from the other bbc, the British Broadcasting Corporation, to train the Butterflies radio team. She is a great believer in the power of the radio: "It can reach the illiterate. It is more powerful than television because the content is paramount; visuals take pre-eminence on tv." She was inspired after meeting the founder of a radio station in New York called Kids for Kids.