Disaster in the making? 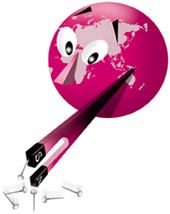 at present, Earth's magnetic field is about 10 per cent weaker than what it was when German mathematician Carl Friedrich Gauss started keeping tabs on it in 1845. Scientists opine that if the trend continues, the field may collapse altogether. Then compasses would point south instead of north. Hollywood has already seized on this twist in the natural disaster genre. In 2003, Tinseltown released The Core, a film in which the collapse of Earth's magnetic field leads to massive electrical storms and blasts of solar radiation.

The field shields the Earth from charged particles coming from the Sun. It deflects the speeding particles toward the poles. Without the field, Earth would be subjected to more cosmic radiation. The increase could knock out power grids, scramble the communications systems on spacecraft, temporarily widen atmospheric ozone holes and generate more aurora activity. Moreover, a number of creatures, including some birds, turtles and bee species, rely on the field to navigate.

Gary Glatzmaier, an earth scientist and magnetic field expert at the us-based University of California, is keeping an eye on the weakening field as he tries to learn more about how Earth's geodynamo works. The geodynamo is the mechanism that creates the field, maintains it and causes it to reverse. "There are small fluctuations, which lead to nothing, and large ones too, which we know from the geologic record are associated with reversals," says Glatzmaier.

When molten lava erupts onto the Earth's crust and hardens, it preserves a snapshot of Earth's polarity, much in the way that iron filings on a piece of cardboard align themselves to the field of a magnet held beneath it. According to Earth's geologic record the field flips on average, about once every 200,000 years. "Several generations from now, humans may witness the reversal. By then scientists will hopefully have a better understanding of the process and be prepared to cope with its effects," says Glatzmaier.

Scientists believe the magnetic field is generated deep inside the Earth where the heat of the planet's solid inner core churns a liquid outer core of iron and nickel. The solid inner core is thought to be a mass of iron about the size of the moon that is heated to several thousand degrees fahrenheit. Heat radiated by this inner core builds up at its boundary with Earth's liquid outer core, causing the fluid there to expand. When it expands it becomes a little less dense and more buoyant. So it starts to rise, leading to convection. This convection generates an electric current and, as a result, the magnetic field.