DVD market is the new battlefield. And companies are not taking any chances 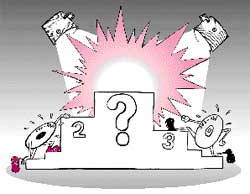 the "battle" to establish a new standard for recordable digital discs has just begun. Two rival groups in electronics companies are neck and neck in the race to be the first to market the new discs. Digital versatile discs (dvd), the latest gadget from the wonderful world of consumer electronics, hold at least four times as much film, music or computer data as a recordable compact disc (cd). Prerecorded dvds currently available have a storage capacity of 4.7 gigabytes, which means they can hold a full-length feature film.

In July 1997, a group of 10 top electronics companies, known as the dvd Forum, agreed on a standard for dvd-ram - an erasable dvd with phase-change technology.These discs have a rare-earth coating which switches between amorphous and crystalline states when illuminated by a laser. However, there is one problem: dvd-ram discs have a limited storage capacity of only 2.6 gigabytes. But the engineers hope that they will soon be able to match the storage capacity of conventional dvds.

Although Philips and Sony are among the 10 companies in the dvd Forum, they have been developing an alternative format, the rewritable dvd , or dvd-rw.

dvd-rw discs have a maximum capacity of 4.7 gigabytes like the normal dvds and will be compatible with all other types of dvds and cds. The dvd-rw standard enjoys extensive support of major computer companies such as Hewlett-Packard, Yamaha and Mitsubishi.

Meanwhile, Toshiba, Hitachi and Panasonic are all set to introduce their dvd-ram recorders to the consumers by early 1999. However, the major problem these and other companies backing the dvd-ram format face is that the conventional dvd players will cannot play the new dvd-ram discs. All companies admit that there will only be limited compatibility between the first generation low-capacity hardware and the new 4.7 gigabyte systems.

The most significant difference between the dvd-ram and dvd-rw is the speed at which the discs spin. The dvd-ram discs work at a constant linear velocity, while the latter spins at constant angular velocity. With the rw format, says Dutch electronics giant Philips, searching for data is much easier. The format also makes it easier to build dvd recorders and players that are compatible with all the different types of dvds and cds. This is primarily because the dvd-rw format does not use the phase-change technology of dvd-ram.

As the competition between dvd-ram and dvd-rw heats up and the groups push their discs into the market, each trying to outdo and outmarket the other, the onus of selecting the standard comes to the consumers. Only they decide which discs last: ram or rw (New Scientist , Vol 157, No 2116).