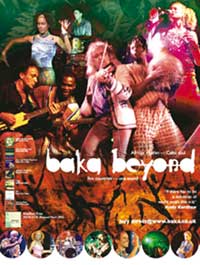 Members of a music band of Cameroon's Baka tribe are touring the uk . Their publicists say the tour is a campaign to "save their rainforest. The Baka are being pushed out by logging companies and safari hunters".

But the band members have no inkling of their conservationist mission. In fact, while those advertising the tour wax eloquent about Bakas being "children of the rainforest", any mention of conservationists draws sharp reactions from band members. "It's at the behest of conservationists that we are stopped from hunting antelopes and monkeys," says one. Another says conservation guards beat him for violating hunting rules. The band has mundane concerns. "The money from this trip will go to my children. When I die, I hope they have money for a house. The problem with loggers is, we never see their money," says Inge, a band member.