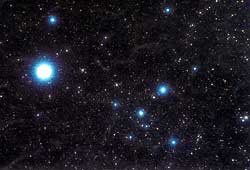 for the first time, astronomers have observed a very young galaxy. This observation could offer crucial clues about one of the most complicated puzzles of modern cosmology that pertains to the formation of structure in the universe. Though, in the past, several theories have been evolved about the formation of galaxies and other objects in the universe after the big bang, none of them have been very convincing.

One of the most interesting things about our universe is that the farther we look into space, the earlier we look into time. This is a consequence of the finite speed of light -- if a galaxy is 10 billion light years away, then the light that we are receiving from it today is the light which emanated from it 10 billion years ago. This time period is also used for determining the age of the galaxy. Ordinarily, light from such a far off galaxy would be very faint, but due to some cosmic coincidence, light coming from ms 1512-cb 58 s was magnified. This phenomenon called gravitational lensing occurs when there is another object, like a galaxy or a cluster of galaxies, lying between the object and the Earth. The light from the galaxy is scattered and then magnified by the intervening clouds of dust and gas surrounding the 'in-between' objects.

Because of the magnification, the astronomers were able to infer several interesting theories. According to them, since there is a lot of dust and gas in the immediate neighbourhood of ms 1512-cb 58 s, it is very evident that there is a vast cluster of galaxies surrounding it. This means that even as early as three billion years after the big bang, the universe had evolved to a great extent. Many experts opine that in future, this inference could go a long way in helping astronomers understand the formation of structure in the universe.