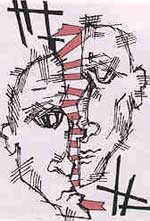 BY DISMISSING the irritable attitude of a patient as that of a bad case, a doctor may actually be overlooking a serious underlying malady. Depression, experts recently warned, often goes undiagnosed and untreated while the patient is treated for some evident disease. It may be manifested or masked by other diseases, but depression complicates mental and physical illnesses and needs to be treated as a separate illness.

Doctors and health workers regard the stress and anxiety of a patient afflicted with heart attack, cancer, stroke or other conditions, as "understandable". But a team of scientists headed by Rex W Cowdry of the National Institute of Mental Health in the us, warns that this so called "normal" feeling of anxiety may actually mask serious clinical depression that could in turn impair a patient's recovery and rehabilitation.

"Co-occuring depression is common and can have a big impact on treatment and recovery, but many people including doctors, are not addressing it as a serious problem, says Cowdry. The team states that normal depression and anxiety in 'a patient suffering with a severe illness becomes clinical depression, if it persists for an unreasonable time and impairs normal functions like sleeping and appetite. So, when the depressed mood gets fixed and interferes with normal functions, doctors should recognise it as a separate clinical entity, say experts.

Depression is a condition with symptoms including feelings of sadness, loneliness, guilt, pessimisrif, apathy and emotional withdrawal. The condition a, lead to the lessening of normal drives like appetite and sex, sleep disturbance, and memory impairment. "Depression can be missed, explained away or masked by other diseases, informs Sylvia G. Simpson of Johns Hopkins Medical lnstitute in Baltimore, US.

In a survey conducted by Simpson, clinical depression was found to co-occur with a host of other diseases. It was diagnosed in 50 per cent of patients who were hospitalised after having a nervous stroke. In patients suffering heart attacks, 15 to 20 per cent suffer clinical depression afterwards, the study found. The diagnosis of cancer can also induce depression in the patient. Simpson and her colleagues found that 30 per cent of cancer patients suffered depression, and six per cent had severe forms of mental condition.

A link between depression and drugs for various diseases was also found. Drugs that have been found to induce depression as a side-effect include heart medications like beta-blockers and calcium -channel blockers, hormones like corticosteroids, antibiotics and medications used to treat gastro-intestinal disorders. So, next time you hear a doctor complaining about a difficult patient, make him see the root of the problem.