Proposal to tax erring industrialists for CETPs in Delhi 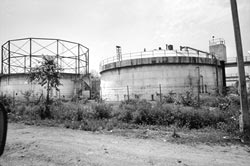 industrialists in Delhi could soon be forced to pay up for common effluent treatment plants (cetps) in their area. A proposal to tax erring industrialists, who refuse to foot the bill for the construction of cetps, was put forth by state industry and environment minister Deep Chand Bandhu. He announced the measure in a meeting organised recently to review the functioning of cetps in the capital.

cetps are meant for treating polluted water discharged from different industrial units and, according to a Supreme Court (sc) order passed in 1997, industries have to bear 50 per cent of the financial burden for constructing these plants in their respective areas. But at present the government is incurring most of the construction expenditure.

Though the proposal seems a step forward in holding industrialists accountable for effluent treatment plants, it needs the approval of the Union government. "We plan to implement the new scheme as soon as we are granted permission," says Bandhu.

But when officials in the Union ministry of environment and forests (mef) were asked about the new proposal, they were clueless. "We have only read about the proposal in news reports, but have not yet been intimated about it," said mef joint director M Hotta laconically .

Arun Mathur, secretary (industry) and commissioner of Delhi State Industrial Development Corporation (dsidc), feels that so far as levying the tax is concerned, approval from the Union government can prove to be the biggest hurdle. "This will take a long time. It is, therefore, far better to ensure payment in accordance with regulations of the cetp act," he adds.

The act says that if dues are not paid, the deputy commissioner of revenue in each concerned district will be asked to recover them as land revenue.

Meanwhile industrialists like R P Mittal, president of the Mongolpuri cetp society, maintain that there has been no laxity on their part. Mittal, however, warns that if construction costs keep escalating, industrialists will be unable to pay their share. "Initially, the cost of the Mongolpuri cetp was Rs 1.61 crore, but it has spiralled to more than Rs six crore." Rajpal Gupta, president of the Wazirpur cetp society, points out that a uniform tax cannot be levied on all industrialists and that a distinction should be made between the most polluting and less polluting factories.

At present only three of the proposed 15 cetps in the capital (Mongolpuri, Wazirpur and Mayapuri) are functioning. The remaining 12 will be completed by September 30, 2002 -- the deadline set by the sc. If implemented, the tax proposal is sure to help the authorities stick to the time schedule stipulated by the apex court.