Government fails to compensate the homeless in Mizoram, Tripura

THE Mizoram and Tripura administrations have served notices to families occupying land along the India-Bangladesh border. The land has to be vacated for fencing the border. Nearly 3,900 families along nine border sub-divisions in Tripura have been left homeless as state government failed to rehabilitate and compensate them. The remaining 500 families of Tripura and 700 families of Mizoram have refused to move out. They are demanding they first be paid compensation. 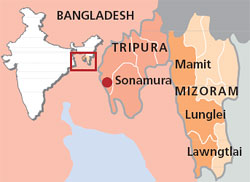 he Union home ministry has sanctioned Rs 14 crore to rehabilitate the families displaced in Tripura due to fencing after it received a proposal from state government. The Mizoram government has not even sent a proposal for rehabilitation package while it is evicting families from 29 villages in Lawngtlai, seven in Lunglei and two in Mamit district. “Victims are protesting over compensation and rehabilitation but there is still no word from the Centre,” said P P Thawlla, MLA of opposition Mara Democratic Front in Mizoram.

In reply to a Right To Information application on plans to rehabilitate people fenced out from their land Union home ministry stated that “neither has this ministry prepared any plan for rehabilitation nor has any proposal been received by this ministry from the Mizoram government”.

The protest against fencing has turned violent on several occasions. State home department records show that seven incidents of clashes between police and residents have taken place since January in Sonamura area of west Tripura. The clashes left several injured. The residents are planning to move court against the alleged atrocities by security forces to vacate the land.