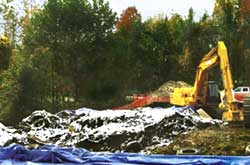 The Ramapough mountain tribe and other residents of Ringwood, New Jersey (nj), us, have filed a lawsuit against the Ford Motor Company and 12 other companies for property damage and personal injuries.

Ford's former automobile plant in Mahwah, nj, was accused of improper toxic waste disposal. The lawsuit alleged that the companies dumped thousands of tonnes of paint sludge and other toxic material decades ago. These continue to contaminate the soil, air and groundwater of the community. The lawsuit also accused Ford and the others of negligence, consumer fraud, conspiracy, trespass and for allegedly failing to tell residents how dangerous the waste was, and then failing to clean it up properly.

Though 13 companies were listed on the complaint, Ford was found responsible for majority of the waste at the site. The attorneys said they would seek us $3 million per resident, which could total up to more than us $2 billion.