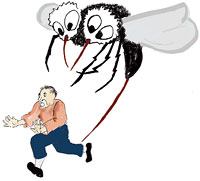 MALARIA-CARRYING mosquitoes, which kill two million people each year, are evolving faster than expected. This can pose a challenge to eradication programmes currently under way to rid the world of the blood parasite.

Scientists have found Anopheles gambiae, widespread in Africa, has split into two species. Two studies published in the October 22 issue of Science report the findings. “Mosquitoes are evolving more quickly and strategies effective against one may not work for the other,” said Mara Lawniczak, the lead author of one of the studies.

The team studied two molecular strains of A. gambiae, M and S, which are morphologically similar but can be identified by their ribosomal DNA sequences. In the first study scientists used comparative genomics to sequence the genomes. In the second, they compared 400,000 points in the genomes of the two and one more strain Bamako to see their evolutionary pattern and factors responsible for it.

The studies found differences in genes related to disease transmission, reproduction, longevity, insecticide resistance, aridity tolerance and larval habitat. As per the study, natural selection was the main factor which caused diversification. Other than this, response of the strains to their specific environments like presence of predators and pathogens in their larval ecology also contributed to the speciation.

So is there a possibility of such changes in Indian mosquitoes? T Adak, scientist at the National Institute of Malaria Research, said evolution is a dynamic process and not restricted to region or organism.

Nora J Besansky, a professor who participated in the study agreed, “A gambiae is a good model for many anopheline vectors worldwide, as it is highly adapted to humans and their environment.” She noted in India there are different species of the vector that like gambiae are members of cryptic species that are morphologically identical but belonging to varied ecologies and showing different behaviours.