WHO reports on the growing 'genetic divide' 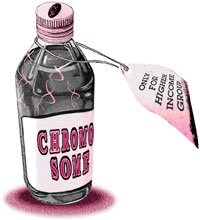 in a valiant attempt to reduce inequalities in healthcare between rich and poor nations, the World Health Organisation (who) has suggested a strategy to help developing countries benefit from new discoveries in genetic research. The suggestions were made in a recently released who report called Genomics and World Health. The report states that the flood of new knowledge from genetic research conducted by rich nations can worsen healthcare inequalities unless money, training and technical assistance are provided to help developing countries to access these benefits. Like the digital divide, the genomic divide could increase disparities between the industrialised and developing countries.

The report, prepared by an international team of 14 physicians, researchers and ethicists, recommends the creation of a global health research fund, with an initial endowment of us $1.5 billion, which should be available to all countries through peer-reviewed grant applications. This should be in addition to allocation of another us $3 billion for a new global health research fund to be partially used for funding scientists researching on diseases prevailing in developing countries.

At present, the us and other countries contribute to global funds used for providing treatment for those infected with diseases like hiv, malaria and tuberculosis. Experts, opine that some of these funds should be diverted for evolving new drugs for treating diseases prevalent in the developing countries. Without funding for such research by governments and non-profit organisations, "the potential of genetic research to combat these diseases will never be realised", the report predicts.
Besides mapping the human genome, scientists are also working on unravelling the genetic structure of scores of disease-causing germs, insects and animals, as well as sequencing nutritionally and medically important plants. Experts state that this will lead to better prevention, diagnosis and management of diseases. However, it would take decades for the advances to get to the clinics and even longer to the villages of poor countries.

The report recommends that representatives of developing countries should be included in the debates over how personal genetic information should be used and how genetically engineered products should be developed and regulated.

It also suggests that developing countries should seek to improve their biotechnological capacity as well as establish programmes in clinical genetics and genetic research. They should also try to establish partnerships between academic institutions, governments and industry to use new genetic technologies to control communicable diseases.
The report also makes a country-wise review of what is the state-of-the art technology available. It predicts the advances possible in the field of healthcare that will result in each country as a result of further exploration of the human and pathogen genomes. The report warns about the conflicting views that exist about the relevant importance of genetic research, even in countries where genetic research is in a well-advanced stage. The report cautions about market optimism about genomic research, though it does not doubt the potential or benefits which could accrue.

Moreover, while the ultimate benefits of such research may be enormous, it is impossible to predict when they will become available for clinical practice and, in particular, which of these will be of greatest importance in improving healthcare in developing countries, especially the poor sections of these nations.

The report rightly observes that work in the post-genomic period will begin to make a major impact on clinical care, albeit slowly. However, the central message is that, because of the uncertainties about both the extent of these benefits for medical practice and the timescale involved, it is vital to maintain a balance in medical research between genomics and more traditional and well-tried approaches of clinical practice, public health, clinical and epidemiological research. Indeed, it must be emphasised that genomic research will only yield its full potential if it is integrated with these disciplines.

The report attempts to give advice on how, without a major increase in expenditure, improved regulations and better investments can make clinical genetics beneficial for developing countries. But in saying so, the who has exonerated itself of any responsibility in managing the future course of development in genomics and ensuring a role for all stakeholders.

The report also voices its concern about "the majority of developing countries that do not at present possess either the technological capacity or the skills to reap the potential benefits of genomic research and apply them to their health care needs".

Furthermore, according to the report, many countries have yet to establish the regulatory, ethical and policy frameworks that are required to address the economic, legal and social implications of this field, and safeguard against the potential risks and hazards of these technologies in the best interests of their populations.

But the report does not place the responsibility of doing so on who. Instead, it states that all who member states will need to make their own assessments of this field and develop future strategies in light of their particular priorities for healthcare, and in their own unique social and economic contexts". At present, most of the who member states are making little effort in designing any framework, protocols of best practice or ethical guidelines pertaining to genetic research.


Considering the contents of the report, who's role in advocacy could yet again come under scrutiny. Like on other global public health issues, it's helplessness in steering this issue also is quite evident, experts opine. And, what who does or advocates is of great concern for the big players in the developing world, such as China, India, Brazil, Thailand and Cuba. These countries have neither control on genomic research nor any motivation to ensure fruits of research for their populace. They instead end up playing into the hands of larger players in the pharmaceutical and biotech industries.

who's struggle to find a voice in the public health debate is evident in the report. It has till recently saat and watched the fast-paced biotech and pharma world hijack the public health agenda from them. With virtually no understanding or position on World Trade Organisation (wto) and trade-related aspects of intellectual property rights (trips) related debates, addressing ethical issues seems to be a distant dream for who. This is especially true in case of issues such as pricing of vaccines and drugs, and regulation of biotech research.

The report also admits that the imposition of developed countries' wishes on developing countries over intellectual properties issues is "worrying" and that "large transnational corporations are becoming more powerful than many governments and have greater lobbying power".

On the whole, the report is a lament of how an international body has failed to create a framework for ethics for research and how it is unable to sustain its presence in public health arena through advocacy, research and simply keeping ahead of the 'curve', which would safeguard the interests of global society at large and contribute to sustainable development.