Is timefor a cell a recurringevent or something continuous? Well to find the answer you mustfirst know its temperature 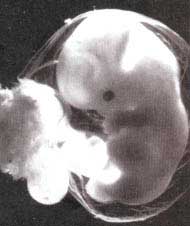 A RECENT piece of work by Fen-Biao Gao and colleagues at University College London shows that oligodendrocytes, cells that are responsible for the insulation that protects vertebrate nerve cells, do count time but not in terms of the number of cell divisions.

Earlier studies had shown that when isolated from the optic nerve of the rat, the oligodendrocyte precursor cells divided a fixed number of times and then stopped dividing and proceeded to differentiate. The present work, which attempts to test when it is that the cells know to stop dividing is simple and ele- gant. It rests on the observation that there is a critical difference between what happens at 37c, the normal body tem- perature and 33'c. When cultured at 33'c, the precursor cells divide more slowly than they do at 37c. However, they stop dividing and begin to differentiate after significantly fewer divisions at 33oc thin at 37oc.

Speaking figuratively, the development of an embryo into an adult involves the cells' knowing where they are and what time it is. Depending on their position in the embryo and on the developmental stage they are at, particular groups of cells switch 'on' or 'off different subsets of genes; and the products encoded by the genes determine the entire diversity of shape, form and function - in short, the course of development. Much contemporary research focuses on the question of exactly how position and time are measured. Of the two, position-sensing mechanisms have received more attention.

As for timekeeping, there are two attractive candidates out of a number of possibilities. One is that cells use an internal oscillator, something that recurs with predictable regularity. The most obvious process that might qualify is cell division. Then the number of 'ticks' of the clock, or number of cell divisions in our example, can be used to tell time. Another possibility might be for cells to measure time in a continuous fashion, as we intuitively do when thinking of aging.

Unfortunately, the way the experiment was designed makes it difficult to say exactly when the cells started differentiating (the percentage of differentiated cells was monitored after a fixed number of days in culture). Nevertheless, it is evident that whatever the clock is - elapsed time is an obvious candidate - it cannot be based on counting the number of cell divisions (Current Biology, Vol 7).