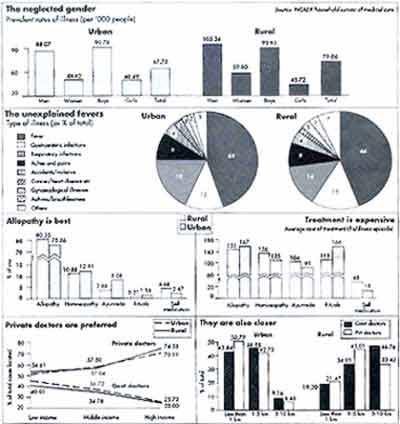 THE FIRST all-India household survey of medical care shows some interesting results. The survey, which was conducted in 1990 in 21 states and Union territories and covered 18,000 households, found that in the perception of these households, males tended to fall ill more than females. As the study puts it, "These sex differentials do not necessarily reflect a better health status of the weaker sex. They show the extent of under-reporting of illness amongst females."

The survey also reveals a high use of allopathy to treat 80 per cent of the illnesses in urban and 75 per cent in rural areas. In nearly 60 per cent of illnesses treated by the allopathic system, the households felt the treatment was fully effective. The survey shows people in all income levels depend more on private than government doctors. Does all this mean that traditional systems of medicine are steadily losing their clientele?