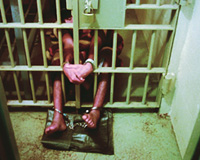 Ghosts of Abu Ghraib, a documentary by Rory Kennedy, shows that torture in Iraq's infamous prison cannot be written off as excesses by over-belligerent soldiers. Culpability trickled upward all the way to Washington, it shows.

The film focuses on the way people assigned as prison guards at Abu Ghraib so quickly fell into behaviour that one soldier describes as "Lord of the Flies". The documentary is framed by clips from Stanley Milgram's infamous "obedience" studies in the 1960s, which showed how ordinary, law-abiding citizens could be persuaded to inflict pain.

"At the Justice Department we did not think the Geneva Convention (the convention on warfare conduct) applied in the war against Al Qaeda because they did not sign it," says John Yoo, a law professor at the University of California, Berkeley, usa, and former Justice Department official. He is challenged by former military officials and administration critics. But those who may be most dismayed by the film are people who agree with Yoo, Kennedy says.