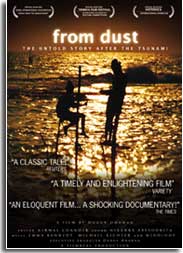 From Dust produced and directed by Dhruv Dhawan 56 minutes

From dust is about post-tsunami rehabilitation operations in Sri Lanka. The documentary takes an incisive look into the 'buffer zone ban' that barred any reconstruction activity within 100 metres of the sea. The buffer zone, created initially as a protective measure against effects of another tsunami, was used to give the tourism industry a fillip a year later, at the cost of local people.

The story is told through three characters: Ravi, Cyril and Cameron. Ravi, a young entrepreneur, lost his father and sister to the tsunami. He lives in Galle in southwestern Sri Lanka, but cannot rebuild his home because of the ban. Ravi and his friends stay in a makeshift tent and wait for the government to allot land to them. Cyril, a fisherman, who lived in a four-bedroom house is now another tent dweller.Having lost his boat, he now fishes from a wooden stilt wedged in the ocean. Even he cannot rebuild his house and the government has asked him to move to flats, 10 km away on the hills. Cameron, the third character, is an acupuncturist from Australia who tries to help people rebuild homes but encounters many obstacles.

The three are obviously under duress. But From Dust is not the usual maudlin documentary about disaster victims. Sample this: Ravi and his friends share lighter moments over beer. One of them wants Carlsberg. The other friend teases him saying that the brand is a little too much to expect for those living in makeshift tents. The party is organised anyway. And as the evening wears out, they get emotional about their houses, land and their country.

The film exposes the government's double standards with pointed interviews of tourism department officials. Sri Lanka is targeting "one million tourists by 2010", besides building "11,000 high-class rooms" in the buffer zone. Visuals of new hotels emerging with "rooms available" boards along the pristine coastline, contrast with those of people living in transitional shelters. The documentary is sensitive and presents an overview of the problems being faced by people to sustain themselves. Eventually, as always, people lose out.