It is a well established practice for non-governmental organisations (ngos) to produce documentary films/videos. Over the last few years, some ngos have departed from the norm to produce short (20/30/60 seconds) social advertisements, popularly known as public service spots. A step further, public interest organisations have now started producing fictions of longer duration 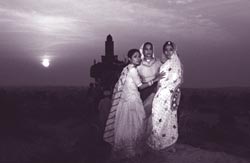 It is a well established practice for non-governmental organisations (ngos) to produce documentary films/videos. Over the last few years, some ngos have departed from the norm to produce short (20/30/60 seconds) social advertisements, popularly known as public service spots. A step further, public interest organisations have now started producing fictions of longer duration.

One such fiction is Swaraj, The Little Rebublic, produced by Delhi-based Institute of Social Science (isi). It celebrates grassroot democracy. It is set in a Rajasthan village, a generic Indian village plagued with inequity along the lines of caste, gender and access to water. Four courageous women of the lower caste challenge the upper-caste, male-dominated village council, to carve out their own path.

Interestingly, the principle conflict in the fiction is around water. Since water is a commodity, poor women without money are refused water by the trader who comes to the village with his tanker. The metaphor of challenge in the story revolves around taking control over water, by the women. The village council prefers a road project.

Consecutive surveys in the village showed no sign of water. But the women find it. The water now needs to be brought to the village. They start a journey, through the desert, to the district headquarters, and meet the distric magistrate who once promised a pipeline if water was found. They dramatically meet the magistrate, who is obviously a woman, remembers them and grants the pipeline project.

The problem starts here. If the film is used in villages to promote the values of local democracy, the miraculous ease with which our protagonists got help from the state machinery will undoubtedly create false hopes. The pipeline avoids the upper-caste quarter. Obviously, it gets broken. One of the four women, trying to save the pipeline, is killed by goons the upper-caste villagers employ. The film uses the narrative of Hussein's martyrdom at Karbala as an inspiring element. But swaraj becomes a tragic affair: justifing martyrdom in search of truth.

Director Anwar Jamal has worked more on individual components of the film, but missed the cinematic value in its completeness. For instance, the music created by Indian Ocean at times becomes overpowering; images with over-saturated colours betrays the politics of the film. Flashbacks could have been worked in a better way. The attempt of the producer to contain a social message in a fictional narrative is always welcome, but the form of narrative is important too.