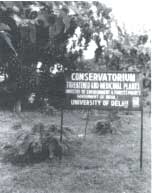 To create awareness about the disappearance of such species, the ministry of environment and forests is bringing out a publication. Flagship Species of India. The ministry has also sponsored the setting up of a conservatory under the aegis of the Delhi University, where 100 such species are being grown.

With the aim to save these species from becoming extinct, the ministry had released Rs 12.5 lakh for developing the conservatory at Delhi University. According to C R Babu, professor of botany, the university has developed a conservatory in over two hectares of land in its premises. "This conservatory has plants that are either threatened or are on the verge of extinction in the semi-arid regions," said Babu. One of these plants is Ceropegia Tuberosa. which is not found anywhere else except in the one or two protected areas in Rajasthan. Another plant in the conservatory which is close to extinction is Tailophora Asthmatica. Its leaves are used to cure asthma and allergy.